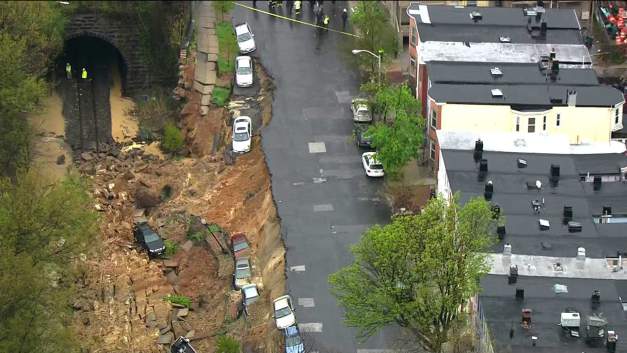 01 May Baltimore’s Big Cave-in (in our backyard) A short walk from our house, you’ll find Baltimore’s big cave-in. Jill and I often walked our dogs along that stretch of 26th Street. For years, it’s been clear that something was wrong beside the railway cut. The street had sunk several feet at the curb to the extent that the sidewalk was angled sharply up to the railway fence. No doubt, you’ve read about the collapse by now. It’s national news. Helicopters have been hovering over our neighborhood for nearly two days straight. TV crews have been camped out to film the digging. And about six cops are on duty to make sure nobody does anything stupid.

One hundred years ago, the railroad cut a 30-foot-deep passage through our neighborhood to allow trains across town. Train travel remains heavy through the cut. Several times a day, we hear the trains screeching and whining as they pass. I can’t imagine those who live next to cut ever getting used to this racket. The collapse swallowed 8 vehicles and has led to the evacuation of about 15 families. Fortunately, nobody was harmed. Still, it raises the issue of infrastructure in America. To be clear: the Baltimore landslide was not a natural disaster. Nature only advanced the inevitable collapse of a man-made problem–a severely compromised road. Old cities like Baltimore have no resources to upgrade water mains, gas pipes, and roadways until they rupture, break, or explode. And big corporations like CSX railroad aren’t inclined to upgrade their railbeds and retaining walls until they have to because they answer first to stockholders who want a profit. The result is often catastrophic. Increasingly we see things like the Baltimore landslide happening all over the country. For example, a recent study showed that 67,000 bridges in America are “structurally deficient.”

Be that as it may, we love a spectacle, don’t we? This catastrophe has brought a carnival atmosphere to our neighborhood. What holds our attention is the fact that, right here in the midst of an old, established neighborhood, we see suddenly something that is as dramatic as a volcano’s eruption. It literally changes the landscape and so, for a time, we’re transported or upended, reminded that we can take nothing for granted. Not only is it unsettling, it is also invigorating (when nobody gets hurt) because we see up-close how powerful Nature is and how, sometimes, we humans are little more than ants hugging a leaf in a strong wind.