If you’re reading this page, you’ve been invited to my retirement party! Here, you’ll find info. on “Indiscreet,” the SanFrancisco/Bay Area “New Wave” rock band I drummed for in the late 1970s. This was not a cover band. We played all original music, written by John Coinman. In 1979, we won second place in San Francisco’s “battle of the bands” (sponsored by KSAN radio) and got very close to landing a recording contract but, well, you know how that goes. We all went on to lead gloriously fulfilling lives. You can read more about us below. 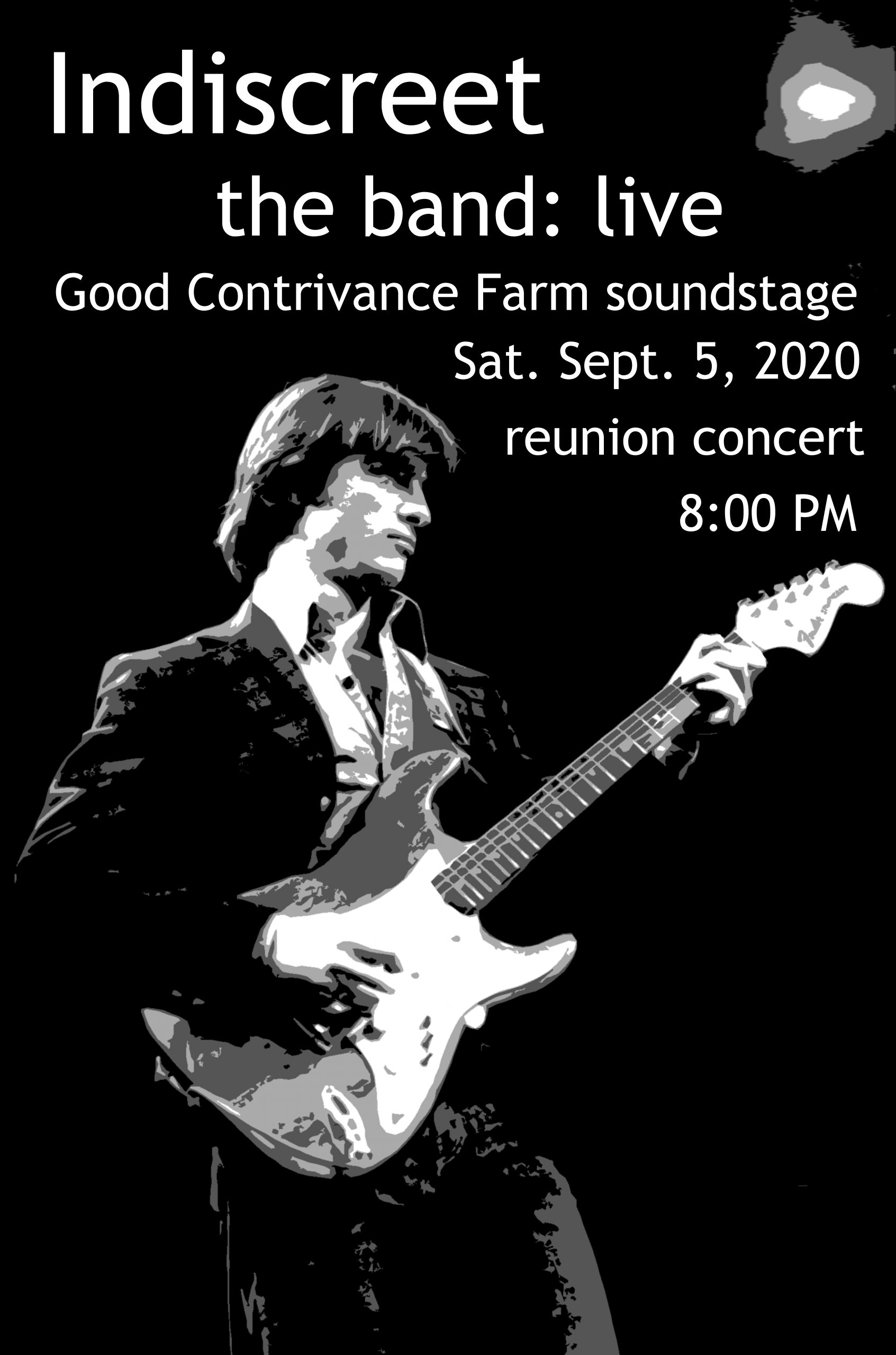 John Coinman is an award-winning singer-songwriter living in Tucson AZ. He has recorded six solo albums and had numerous songs in films and on television. John is the bandleader for Kevin Costner & Modern West (KCMW) and he was the Music Supervisor for the film Dances With Wolves.. He has been touring with KCMW since 2006 and has recorded 5 albums of original songs with the band including the companion CD to the award winning miniseries Hatfields And McCoys. He has collaborated with many notable artists including John Densmore of The Doors, James Intveld, Michael Blake (the writer of Dances With Wolves), Amy Rigby, Tony Gilkyson (of Lone Justice and X), Teddy Morgan, and 4 time grammy winner Alfonso Rodenas. John’s new solo album Under The Sun was released in October, 2019. Topher Sisson is a native son of Baltimore. After studying classical guitar at Towson State for a couple semesters, he was contemplating transferring to the Peabody Conservatory when he attended a Pink Floyd concert at Merriweather Post Pavilion, (Dark Side of the Moon Tour).

“When I heard David Gilmour play the guitar solo on ‘Money,’ I pretty much decided to move California and play Rock and Roll instead.”

Topher met John Coinman soon after arriving in the San Francisco Bay area in 1976, and started playing together with a variety of diﬀerent musicians, until Steve Berryman and Ron Tanner arrived to form Indiscreet.

“I was playing classic guitar in restaurants to make some money and we would rehearse new songs and record them at Outback Studios, first time I had the chance to write and record guitar parts for original songs. John was a very prolific song writer, and we had a lot of opportunities to try things out without much pressure to play out for our income. If the song worked, it was a keeper, if not just wait for the next song!”

After winning a radio contest of local bands in the Bay Area, Indiscreet had the opportunity to play in a number of the showcase clubs around the area. “We had a well-rehearsed show and it was nice to get out of the studio and play this stuﬀ in front of people at last.”

But the music industry at that point was way bigger in Los Angeles than in San Francisco, and there were simply more opportunities to pursue a career in music there.

“It’s too bad we didn’t hang together a bit longer, but bands have a life cycle like anything else and we went separate ways at that point. I made it out to Los Angeles a year or so after John did and we kept in touch but were headed in slightly diﬀerent directions by that time. I managed to support myself as a working guitar player for a fair number of years, even got to record on a Taj Mahal record, but it’s really very competitive and the pot of gold never really arrived. Still it was an exciting 12 years of my life, and I feel pretty lucky to have pulled it oﬀ!”

After returning to Baltimore in the 1989, Topher joined up with his family’s restaurant business, which was about to introduce the concept of the Brew Pub to Baltimore. Sissons on Cross Street was his job for a few years, until resuming guitar playing locally with Angie Miller, and Harry Traynham part time for a number of years while also working as a Cabinet Maker. Steve Berryman’s “radio voice” landed him a show in his teens as a local disk Jockey, now known as an “on-air personality”.  He took piano lessons and learned his first guitar chords at a youth science geological dig campout on the Mojave Desert in 1962.  It inspired him to pull the dusty rummage sale guitar case inherited from his grandmother out from under the bed.  The strange looking metal-bodied instrument inside had Hawaiian themed etchings and strings like nails that made playing difficult. It turned out to be a valuable single-resonator Dobro, built by John Dopyera who later saw it and recalled making that model.  But that dobro simply wouldn’t do.  In order for Steve to join his friend’s surf music combo The Worlocks, he needed to acquire an electric guitar and amplifier, preferably a Fender.  His friend Tom got his first.  So, if Steve wanted to be included he would be “stuck playing bass”.  He rented a white Supro bass for a year until he finally got his Fender P-bass and Bassman amp. He started liking bass a lot.

Steve played in skinny-tie dance combos with matching powder blue dinner jackets playing and singing the likes of Bony Moronie and tunes by the Beach Boys while doing choreographed “steps”.  He also played guitar and piano in folk Hootenannies doing Kingston Trio and Chad Mitchell tunes. His bass style was influenced by session players like Carol Kaye and the iconic L.A. Wrecking Crew who backed hundreds of hits. Bass-heavy Motown records were also an inspiration. Styles changed with the “British Invasion”, and he evolved along with them into folk-rock, then psychedelic music.  He played Hollywood clubs in The Columbia Bicycle.  After they disbanded and the army draft rejected him as “too tall”, he worked his way around Europe and did occasional gigs in Germany and London.  He returned to L.A. in ’69 and was hired to join the blues band Day and Age in St. Louis. They moved to San Francisco to play the Fillmore changing the name to Harbinger.

When John made his move to Hollywood, Steve immediately joined San Francisco new-wave band The Ironics.  When they disbanded, family obligations and work as a senior telecommunications systems specialist sidelined professional music.  In retirement he now enjoys playing “just for fun”.  He is currently working on experimental modalities with talented Marin County guitarist Dave Mazza who has toured Europe with Robert Fripp and Adrian Belew.  Hopefully additional “just for fun” projects are just ahead. Ron Tanner spent his 20s chasing the musical dream in the San Francisco Bay Area, where he played a wide variety of venues, including California’s honky-tonk circuit and Nevada’s casino circuit. The highlight of this time was his stint with Indiscreet. Ron went on to earn graduate degrees in American literature and creative writing. His awards for writing include a Faulkner Society gold medal, a Pushcart Prize, a New Letters Award, a Best of the Web Award, a James Michener/Copernicus Society Fellowship, and many others. He is the author of four books, most recently Missile Paradise, named a “notable novel” of 2017 by the American Library Association. He taught writing at Loyola University-Maryland for 29 years and now directs the Good Contrivance Farm Writer’s Retreat, a 501 C-3 nonprofit. He still drums, by the way, now with Jazz Caravan,  which has been performing in the Baltimore metro area for over 20 years.

The boys in the band now: John, Steve, Ron, & Topher