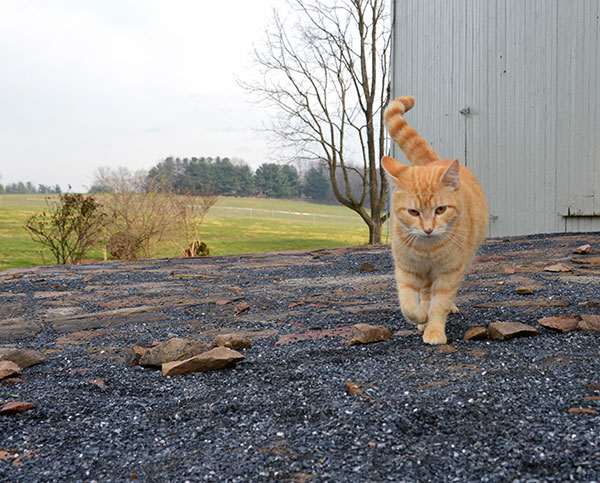 06 Apr Did the Three-Legged Fox Eat Our Cat?

A couple weeks ago, Peaches — our sweet orange tabby — went missing. She was the friendliest of our barn carts, always nearby, always first to greet us, always curious and following our every step around the farm. Just before she disappeared, she started getting a bit aloof — she wasn’t making her frequent appearances. She might have been pregnant and ready to nest. We were hoping for a litter (which was why we didn’t neuter one of the male barn cats).

Some cats will go off and hide when they’re ready to birth. We suspect this is what Peaches did. Problem is, if you leave our gated farm, you will be in fox territory. The three-legged fox has made it clear that she’s in possession of the land behind ours. The fox has, on occasion, sat beyond our fence and peered in at us. Not taunting, exactly; more like musing, maybe even longing.

Very worried, Jill and I decided to make a search of the hinterland one sunny Saturday morning. We got our neighbor’s permission (he’s very particular about visitors) and made our way over the fields. Our neighbor owns the 100 acres that surround our little farm. It’s hilly, lovely land, that dips finally to an arm of . We saw several deer blinds and then deer, their fat white tails flagging their retreat, then we came across a partial deer carcass hanging in a tree–a bizarre sight, like something from the first season of “True Detective.” We were a good ways from home, nearly a mile, when we came across another ruined animal. I identified it as a small fox. Jill said, “It’s too early for kits [baby foxes].”

There wasn’t much left: one ear attached to a fragment of scalp, a piece of jaw, and then the pelt. Nothing else. That’s why it wasn’t upsetting to view, there was just so little remaining. And, relatively speaking, it was so clean.

As we walked back, we continued debating. It couldn’t accept that we had found Peaches. I mean, what were the odds that we’d come across her scant remains nearly a mile from home? But, then, Jill’s reasoning made sense: what else, who else, could that have been?

By the time we got home, both of us quiet with grief, I said, “Whether or not that was her, I will admit this much: she’s gone, she’s dead, we won’t see her again.”

Not long after we bought the farm, a fellow farmer told us, “You’ll have to get used to death–there’s so much of it on a farm.”

This, our first dose, came earlier than we had expected. We worry about the other cats. We need a big farm dog — a guardian breed — but we can’t get one until we get the other animals (chickens, ducks, sheep): the dog has to bond with the animals he’s guarding. So we’re kind of in limbo, fretting every time we gaze into the dark land behind us.

And would you believe this: as I wrote that last line, I heard the fox’s banshee cry out back.  Quickly I stepped onto the porch — into the midnight cold — and I barked and barked until our big dog, roused from sleep, joined me.  And so I let Big Dog out and then, together, we barked and barked into the darkness, our breaths cloudy in the chill, until finally the fox’s haunting cry receded into the distance.