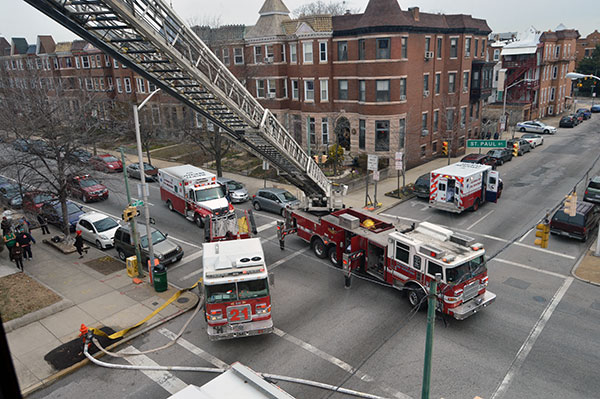 This morning, while changing a light bulb in the kitchen, I smelled burning plastic. Odd, I thought. Usually, our neighborhood smells of oak woodsmoke from the excellent, new restaurant a few blocks away: it has a wood-fired grill. I stepped onto my porch to get another whiff. Yep, burning plastic. I peered out the porch poor, turned my head and saw flames leaping from the second story window of the house three doors down. Holy shit. I called 911. The fire already looked out of control, feeding on something fast and easy. By the time I hung up, the sirens were nearing. The most common cause of the more than 400,000 annual house fires in America is cooking. We don’t yet know the cause of this fire but most of us are pretty sure it started in this neighbor’s kitchen, at the back of the house. Usually, it’s a pot of something that catches fire. A single pot of, say, oatmeal that burns up in your kitchen can devastate your house with smoke damage. Something like that happened to my mother’s townhouse many years ago. And, I’m sure you know, smoke is what kills, usually, not the flame: you asphyxiate.

The street was foggy with smoke as three firetrucks roared up to our block. The burning building was evacuated. The tenant above the burning apartment suffered smoke inhalation and was burned badly enough to be taken to the ICU. Sadly, she lost her cats. Jill and I heard the firefighters smashing every window of the burning house. Then they slammed the building with a jet of water from the front. But the back was the bigger problem, harder to get to and the firefighters had some maneuvering to do and it took a while to get the hose back there and the flames were roaring out in huge dragon bursts. The neighboring porch, just two narrow rowhouses away from us, was smoking like dried leaf laid on hot stone–it seemed just a matter of minutes before it would blow. The firefighters evacuated the two houses between us and the burner but said we could stay with our house. The question was, Could they get this fire out before it spread? One truck aimed its ladder to our roof. I assumed the firefighters were up there waiting and watching for the telltale signs of smoke snaking out of the roof. After the Great Fire of Baltimore, in 1904, wooden rowhouses were outlawed in the city and every new construction was made of brick or other forms of masonry. Fire codes were put in place, which is why every rowhouse after that time has a firewall that projects through the roof, to discourage the spread of fire from one dwelling to the next. Unfortunately, fire can jump buildings via the rickety back porches that most of these old buildings have. That’s what was happening in this case. It was clear that the fire was spread through the porch in the house closet to the burner. So we were worried. Worried as I was, however, I had great confidence in Baltimore’s firefighters. I mean, these men and women combat difficult and dangerous fires every day. They don’t mess around. I recall the day that our house’s fire alarm malfunctioned and suddenly, startlingly, there were four fully-geared firefighters at our front door, axes in hand: “You all right?” the leader growled. “You got a fire?” They looked like helmeted giants and they were amped up, breathing hard and ready to tear into the house. I assured them that everything was fine. But I was grateful too, for their readiness. A f**king fearless crew. God bless them.

They did their job today. We did not have to evacuate. The tenants have been displaced, however, and it’s likely they didn’t have insurance to cover their loss. The house, no surprise, is a total loss. Gutted. All told, it burned for no more than thirty minutes before it was doused. But think about that: three stories, 3,300 square feet plus the basement, charred to a cinder in thirty minutes.

Our house smells of . . . burnt plastic. Tomorrow, a warm day, we’ll air it out. The houses closer-by have some smoke damage. We were very lucky. And we remain very grateful to the Baltimore City Fire Department. Three cheers for those brave souls who risk their lives — every day — for our safety!