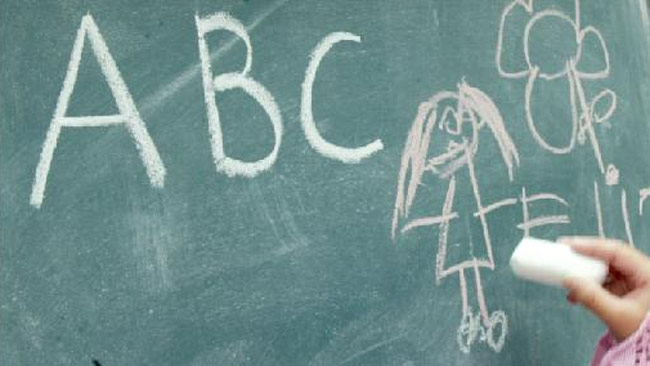 If you are a teacher, you are familiar with the “whiteboard,” also called the “dry erase board.” It has replaced the chalkboard in most schools. Also it’s common in the workplace for lectures, strategy meetings etc. It consists of a laminated glossy white surface on which you write with colored markers. When it first appeared in the late 1980s,it was touted as a modern, much-improved alternative to the chalkboard. This was bullshit. Proponents of the whiteboard claimed that the traditional chalk board was messy and too dusty. Chalk dust could affect kids with asthma. If you’re older than 40, you may remember your grade school teacher sending a volunteer outside to clap clean the chalk-filled felt erasers every day. It was a job most kids envied because you got out of the classroom to do something nobody else got to do. Until this year, when I was put into a “high-tech” classroom, I have always used a chalkboard–for 25 years of teaching. It never occurred to me that the chalkboard needed improvement. The great thing about a chalkboard is its simplicity. Nothing could be more fundamental than chalk. It is soft white limestone–the compacted skeletal remains of sea creatures. Shells mostly. Stuff that’s millions of years old. The chalkboard itself is porcelain enamel. It was invented in the early 1800s, so it’s not as old a technology as it might seem. It’s incredibly easy to use. You may think that the whiteboard is an improvement insofar as it’s easier to erase whiteboard marker than it is to erase chalk. True enough. And chalk leaves a film on the chalkboard. Dry-erase markers don’t leave a film. But dry-erase markers leave a mucky smear on the eraser itself. And that smear can get all over your hands. Dry-erase markers themselves used to be toxic, containing an odorous ketone. They now contain ethanol. But they’re still odorous, a smell I don’t like–and it can aggravate people with asthma. The worst thing about the dry-erase alternative is the markers. Yes, they come in many colors, but they don’t last long. If you press too hard on them, the marker’s wick disappears inside the container. If you don’t cap them, they dry out. Also you have to have a special fluid to clean the erasers. I don’t know if the fluid is toxic, but most likely it is. The result is that the dry erase marker is a hassle, taking more time, attention, money and maintenance than the traditional chalkboard. A box of chalk lasts a year, maybe more. A box of dry-erase markers might last a month. You have to buy dry-erase “kits” to keep up with the use. Also, unlike chalk — which you can use varying ways, to create block letters or elegant script — each dry-erase marker comes in only one thickness. So, if you need a bolder line, you need another dry-erase marker. Pretty soon, you find yourself sorting through a pile of markers, half of which have dried out, capping and uncapping them to find just what you need. In short, the dry-erase marker and its whiteboard is a scam manufactured by supply companies who have capitalized on our perceived need to improve the things we use. (A simliar scam is the Compact Flourescent Bulb, which is toxic, fragile, and much more short-lived than the manufacturers claim.) Let me be clear: I don’t advocate keeping the chalkboard for sentimental reasons that conjure quaint schoolroom scenes from a bygone era. I advocate keeping the chalkboard because it doesn’t need improvement, as its 200-year-old history plainly shows. Some things come to us in their ultimate and most useful form. The chalkboard is one of those. Wherever I can, I shun the messy, high-maintenance whiteboard. Maybe you will too.