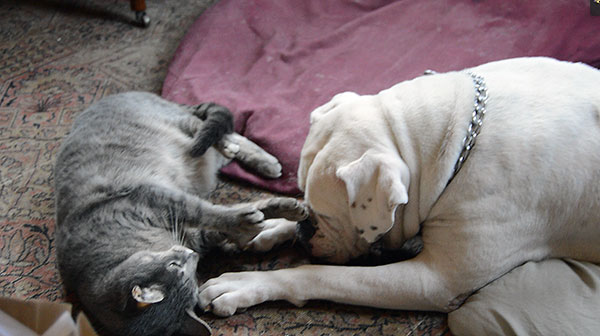 Our cat, Frankie, loves our bulldog, Sadie. I’m not sure when we noticed it but, soon after we brought Sadie home from the rescue shelter, Frankie strode up to her, put his head to hers, then gave it an affectionate butt. Sadie stared at her in surprise, it seemed. We knew Sadie was okay with cats but you never know the extent of that okay until it’s tested. Frankie was willing to test Sadie to the max, probably because he sensed that Sadie is a gentle soul. Cats are intuitive that way. Frankie would never head-butt our basset hound, for instance.

The cat/dog dynamic is fraught, as you know, because we assume a dog will chase a cat. But cats are smart about this, too. A cat will not run from a dog if it knows it can’t get away. Instead, the cat will hunker down and/or puff up, readying for a fight. Often times, when a dog charges a cat and the cat doesn’t budge, it startles the dog. Dogs like a good run after something. A cat that won’t run spoils the fun and some dogs in such a situation simply don’t know what to do.

Sadie’s history involves no interactions with cats because Sadie was chained up for most of her life–until she was rescued. We’re not sure what makes Sadie so gentle, except that she was used as a breeder, which is to say she’s had a lot of pups in her time. So she knows about nurture. When Frankie starting courting Sadie, he surprised us becasue we didn’t see Frankie as an especially affectionate cat. If you watch their video (part I), you’ll see that Frankie won’t leave Sadie alone–he wants her to want him. It’s all quite innocent, mind you. It seems that Frankie wants Sadie to groom him. So Sadie obliges, licking Frankie. Sadie would like more action, actually. She wants to play but, compared to Frankie, she’s a giant. When she attempts to lay a playful paw on him, Frankie can’t bear the weight. At first, we were afraid that, in her exuberance, Sadie might inadvertently harm Frankie. But that hasn’t happened. Our second video will show this. The current video shows Frankie in full courtship mode and Sadie sleeping through every bit of it. We think this video should be sent to people who aren’t getting along, and especially to people who think war is a solution to disagreements. No two creatures could be so different in temperament and inclination than a dog and a cat. They are the yin and yang of the pet world. As such, these two-Frankie and Sadie–give credence to that now-old utterance of optimism: Make love not war.

Video here: When a Cat Loves a Bulldog