11 Sep A New Roof for the Barn 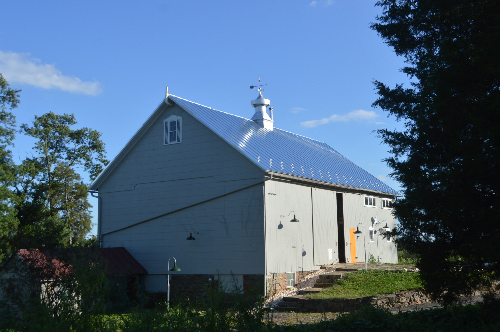 The craftsman who put the metal roof on our house is so good and so busy, we sat on his waiting list for a year when it came time to re-roof our barn. His work is worth the wait. He’s old school, one of the few guys who can make you an authentic raised-seam metal roof. It’s a thing of beauty, the old-style roof. And it will outlive us by many decades. 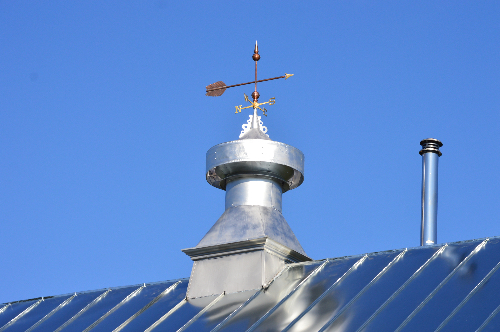 Jill and I wanted to do it right, so we decided to crown the roof with an old-style cupola. You’ve seen barn cupolas in passing, no doubt, but probably paid them no attention: there’s no reason you would. Actually, cupolas are vents. Barns used them to vent the build-up of heat. A barnful of animals can get really hot in the summer. Our cupola was going to be purely decorative–we weren’t about to cut a hole in our roof to create a vent.

Nowadays, barn cupolas are hard to find. There are fewer barns around; barns aren’t being used in quite the same way anymore; and there are better ways to ventilate a barn. The biggest cupolas are made of galvanized metal. These can be quite large–over eight feet tall– and quite expensive: $2500 or so new. Even used ones can cost well over $1000. 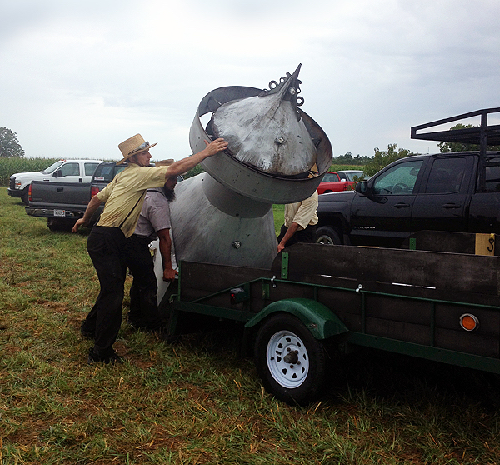 Because Jill and I are forever on a budget (our old farm eats money the way a child eats candy), we had to find a large cupola cheap. We searched far and wide and, with only one week to spare before our roofer arrived, we felt compelled finally to drive to a farm auction . . . in Indiana. So we piled the dogs into the van, hooked up our open-bed trailer, and off we went for a weekend road trip.

The auction was run by the Amish and it focused solely on architectural salvage from farms. Just our kind of thing. Had we the money, we would have bought all kinds of cool stuff, like big wooden corbels and ornate windows and industrial style barn lights. We were a bit worried because the featured items of the auction were several huge barn cupolas. As I said, they are hard to find and, if they are in good shape, they are fairly valuable. So, more than one buyer was eyeing these. 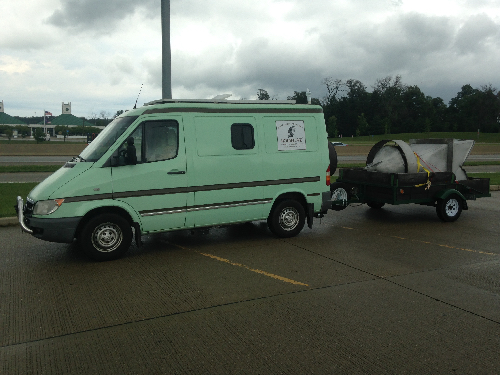 But Jill and I had come a long way and were determined to go home with a cupola. When the bidding came around to us, I waited until the price dropped to $300 (the auctioneer will keep dropping the price if no one bites), then I raised my hand. I was in. When you’re in the bidding, I’ve found the best strategy is to act like I’m waiting for a bus. Just stand there nonchalantly, giving nothing away, almost as if to say, “Whatever.” And I don’t look around at the competition. Stone-faced, I just stare at the auctioneer, nod causally each time the raised bid comes back to me. My attitude seems to say, “I could be here all day, bidding. No problem.” Never mind my stomach is full of flitting bats. 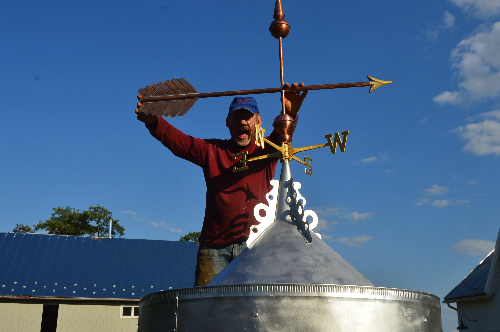 This wears down the weak-hearted. I stayed in until I was two hundred from our limit and it looked like I was going home with the biggest and best cupola for a good deal less than we had thought we’d have to pay. Then a new bidder jumped in. Damn. That happens sometimes. People get excited and think they can snatch the sale with a bold bid at the last minute but then, like most, they see that it’s going to get expensive and suddenly they drop out. So, tt cost us another hundred. But we got the cupola.

We were quite a sight coming home, the trailer laden with what looked like a rocket ship. Jill insisted we get a weather vane for the thing. I tried to nix the idea but she insisted, as always: Do it once, do it right. When the weather vane arrived, the day before the cupola was to go on the roof, I saw that she was right. It looks way cool. 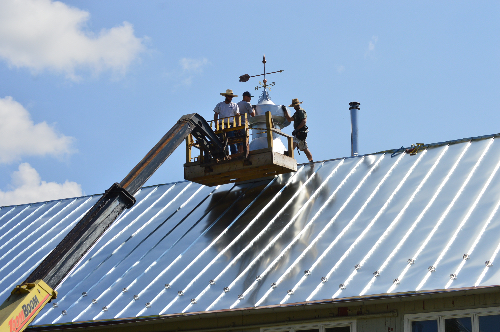 If you had seen the barn’s former roof, you would have wondered why it needed replacing. It still looked fresh. In fact, it would have been good for another 50 years. But somewhere along the line, somebody tried to keep the roof from rattling by attempting to nail it down in certain places. Most likely this happened when the former owners put an apartment in the barn and didn’t want to hear the old roof rattling in the wind. Those tin roofs can be noisy, for sure. Alas, whoever attempted this seeming improvement did it all wrong; in fact, they hammered all kinds of nail holes in the roof (missing the wood struts underneath) and so the roof leaked. It leaked a lot. In about twenty places. “A terrible waste,” my roofer concluded.

Now that we have a new roof on the barn, we can fix up the interior. It’s going to be programming space for concerts and lectures and so on. We’ll try to get that done next spring.