As Jill’s cancer worsens, I’m anxious to render as best I can the full picture—which is to say we’re not living 24/7 under a shadow of dread. But here’s where it gets tricky because, of course, we harbor plenty of dread. Jill’s cancer has now crept into her lungs. Which confirms what we’ve always known: cancer will have its way, as cancer almost always does, taking her body piece by piece. 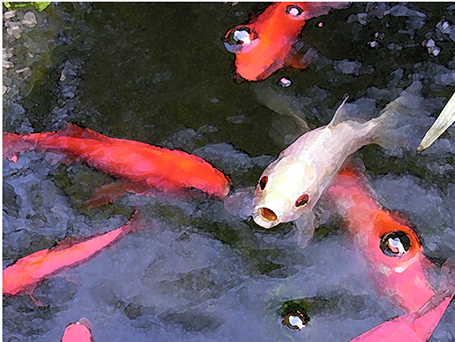 This latest setback means that her third type of treatment isn’t working. So–starting today– they’re going to irradiate the affected part of her lung, which has collapsed, in the hope of thwarting cancer’s spread yet again. That’s all we’re doing: by slowing it down, we’re giving Jill a little more time. The primary challenge is to sustain her quality of life. Jill is currently experiencing increasing pain and loss of breath. Radiation should help unlock her collapsed lung and release its blocked fluids. Then she’ll feel better. As you can predict, there will come a time—perhaps sooner than we know—when the travail of treatment isn’t worth its increasingly limited results. Jill says, “I’d just like to feel as good as I did two months ago [when the chemo was working].” Not asking for much, right?

The rest of our life includes the following:

1) The son of a family friend built Jill a pond adjacent to our rear patio. He did a fabulous job! Ten-feet by twelve, it’s a sizable drop of water, over four feet at its deepest, with a waterfall and antique dolphin fountain, brimming with plants and surrounded by huge rocks that I tractored in. Jill and I had a lot of fun putting the plants in: she supervised as I floundered about in the water. Now, every afternoon, with Maisie and Oliver at her side, she spends quality time gazing at the water, feeding the fish, and looking for tadpoles. 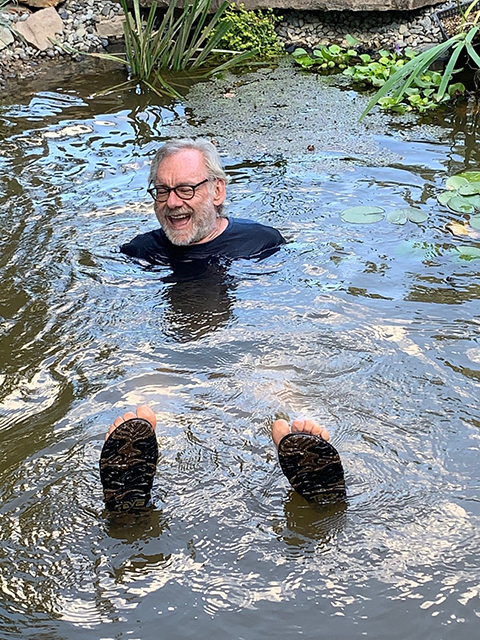 2) We’ve had a cricket in our kitchen for weeks, chirping loudly at night for a mate who, presumably, will never find him. These are called the Pennsylvania Field Cricket. You’ve seen them in your basement. And heard them all night long. If you have housecats (we have three), you’ll find broken cricket bodies throughout your house. In case you haven’t noticed, late summer is cricketapalooza—crickets are everywhere: lift a tarp or bucket or board and they’ll spring out in all directions like hot popcorn.

3) Late summer on the farm is the time of fallen fruit: peaches, plums, kousa berries, blackberries, raspberries, paw paws, and so on. This is why Maisie, our rumpled elder basset hound, is out of control: she eats whatever she can find. Peaches are her favorite and, really, there’s no way to control her overeating them because, well, fruits will fall when they fall. Sometimes when we let the dogs out at night, Maisie will disappear for thirty minutes or more. Then we know she’s far afield rooting around for something good. Peach pits in her poo. Every day. We feed her gas pills to keep her from collapsing from bloat. 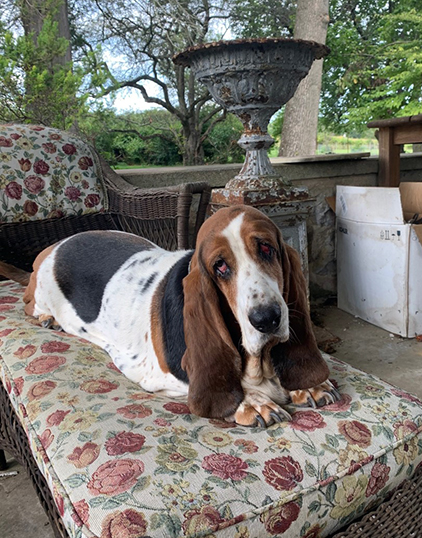 4) Cultivating an orchard, I’ve decided, is all about patience because you can’t rush a fruit tree. Our cherry trees are five years old and still won’t bear fruit. Same with apples. Plums came up this year but they’re small and sour. Next year: more fertilizer, more water, and better pruning. 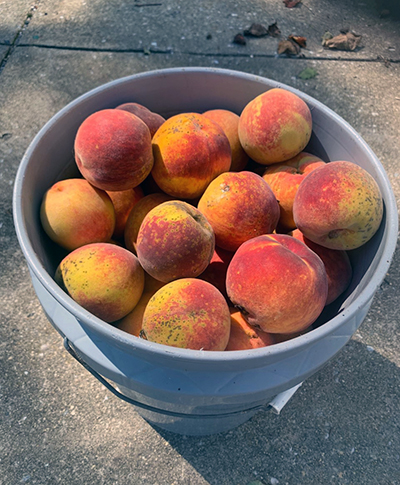 A five-gallon bucket of peaches!

Only one of our three peach trees produced successfully this year. I blame last year’s cicada invasion, which traumatized the trees so thoroughly—ripping into the bark of nearly every twig and branch—they’re still not recovered. Our one successful tree yielded five bushels of peaches: about 100 pounds of fruit. And, oh my, they were splendid! I canned some, made various desserts (the winner was an oatmeal breakfast bar), jellied many jars of them, and dried pounds and pounds of them. Dehydrated peaches are like candy. They’ve become Jill’s favorite. 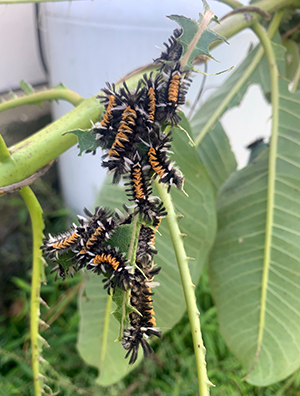 5)  At the back our northern field, just on the other side of our fence, I discovered a stand of milkweed—big healthy stalks. I’ll have to move some to our wildflower meadow. Instead of monarch caterpillars feeding on them, I found tussock moth caterpillars: fuzzy orange and black critters. The colors are meant to warn off predators because milkweed is highly toxic and caterpillars that feed on milkweed make foul-tasting meals, as birds quickly discover.

6) Eager (desperate?) to lose weight, I made the mistake of buying a fitness app for my phone. I didn’t know it was an app. I thought I was buying something like a fitness guidebook. Now I’m harassed several times a day by the app: “How many steps have you taken today?” “Ready to get sweaty? Earn the body you’ve always dreamed of!” “We’re streaming in ten minutes. Join the fray and work those muscles to make a new you!” The more I hear from the app, the less I’m inclined to exercise. 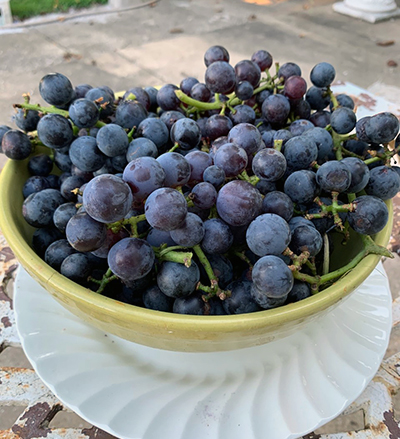 7) Jill is still seeing a few clients in her (virtual) counseling practice every week. It’s gratifying work she can still do, though soon she’ll have to retire once and for all. When she’s not counseling, she’s needle-pointing, which she finds very calming—in front of the TV, with Otis our big blue on her lap (he’s obsessed with her) or she’s reading on the front porch with Scrapper, our friendliest barn cat, on her lap. Jill makes fabulous needlepoint canvasses. One of my goals is to get these fifty or so canvases made into pillows.

8) To whomever sent us the new, window AC unit: thank you—we were so touched by this gesture! 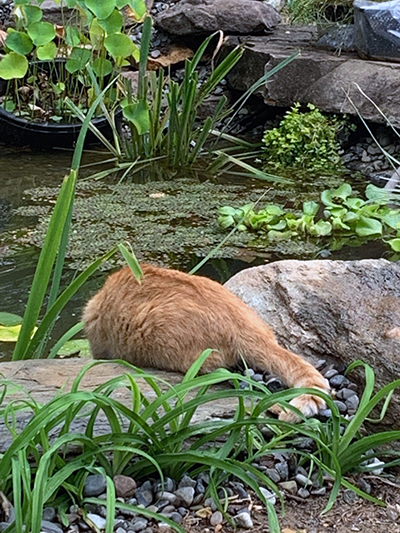 Scrapper checking out the pond

9) Jill and I spend hours on the upstairs couch, surrounded by our three cats and streaming historical dramas on TV, the dogs sleeping nearby. Increasingly Jill is stopping a show in mid-stream to talk. Long talks about how she grew up, the troubles she had with her mentally ill mother, the frailties of her feckless father, the love she has for her cautious brother, the painful years of her adolescence. She’s taking an accounting of her life, reviewing the passages she’s made. And she asks me to do the same. Even though we’re familiar already with the most intimate details of each other’s life, I don’t hesitate to review mine as she reviews hers. How did we become the people we are? What measure of love made us care for others and worry about the world? What might have become of us had we not found each other? 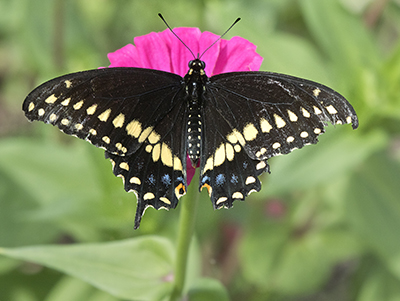 10) We’re seeing more butterflies this season than in any previous summer. Not sure why, especially since a nearby farm tell us they’re not seeing many. Mostly we have swallowtails. From the beginning of our farm adventure, we hoped to create a haven for birds and butterflies—and this seems to be happening. We’re very happy about that. 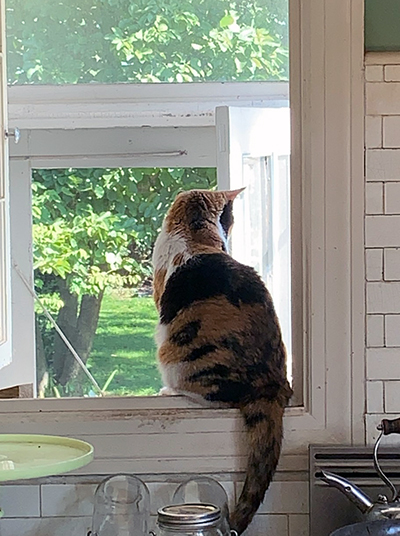