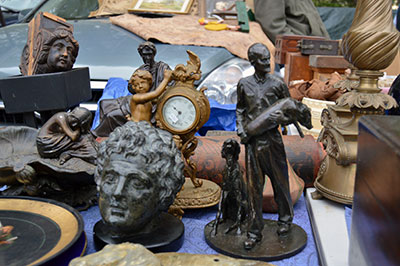 11 Jan How I Got Burned at the Flea Market If you’ve watched “Antiques Roadshow,” you’ve seen segments where a collector believes he’s brought in a priceless artifact–like a Ming vase–only to be told by the Roadshow appraiser that he’s got a fake or a reproduction or he’s grossly over-estimated the value of the item in question. In short: he’s been burned.

Sometimes the collector has broken even on the buy–the appraiser’s estimate is about what the collector paid–and so he goes home with a dashed dream but no great damage. Other times, the collector has lost thousands of dollars in the transaction, having bought a $30 trinket for $3,000.

I love watching these segments because, sorry to say, schadenfreude kicks in and I relish the would-be collector’s misery. Then I shake my head in dismay, sometimes disgust, and think, “Man, I’m never gonna get taken like that. No, sir, not me!” Just yesterday, Jill and I went to a big antiques show and spent a pleasant afternoon browsing through the dealers’ booths. Then, as we were getting to the end of our browsing, I made my first mistake: I sneaked away from Jill to buy her a couple presents for Christmas next year. But, I should add, I am not to be trusted alone. I can be an impulsive buyer. One time I nearly brought home a giant “Zombies of the Stratosphere” poster but I couldn’t find the dealer (he was in the bathroom) and so I stood around and waited for his return. Then Jill found me and asked what I was up to. When I showed her the poster I was intent on buying (a garish thing as big as a dining room table), she turned and looked at me with appalled disbelief. She said, “I will not have that thing in my house.” I told her I thought she’d like it. She said, “What ever gave you such a crazy idea? Zombies of the Stratosphere?”

So here I was cruising the antiques show on my own, thinking, “Oh, boy, I’m gonna get some cool stuff and won’t Jill be impressed!” True to my plan, I bought Jill’s gifts. But then I saw it: a big Beatles poster, banner-style, in great shape and clearly original. It looked like an advertising piece. Maybe rare. I’m no Beatles expert but I pride myself on having a good eye for antiques and collectables. This item looked cool enough that I could, at least, ask what it was selling for. The dealer was willing to let it go for $425. He said it was a banner used to sell the Beatles’ first paperback book in 1964. “Very rare,” he said. “Probably worth $1200.”

All of the photos on the banner were of the early Beatles’ era. Early Beatles’ stuff sells best, I figured. I said to the dealer, “I’ll give you $300.” He shook his head and said, “Man, I’m been carrying this thing around too long and know it will sell eventually but you hit me in a weak moment. $300 is what I’ve got into it, but what the hell. Sure, it’s a deal.” Just then Jill called me, wanting to know where I had gone. I said, “I’m making a purchase. It’s an investment. I’m sure I can sell this thing for three times what I’m buying it for.”

“Is it something that goes in the house?”

“No,” I said. “It’s just an investment. I’ll put it in my rehearsal room for the time being.”

It is was cool: a three-color banner about five feet long and about 20” high. It show Paul, John, Ringo, and George in big headshots and also in various foursome poses.

Somebody came up to me and asked, “What’d you pay for that?”

“And what’s it worth?” the stranger asked.

“About twelve hundred,” I said proudly. Like money in the bank! I thought. Then Jill said, “Hey, we should take your banner to Antiques Roadshow!” She had just signed up for tickets for their summer filming in Cleveland.

“Excellent idea!” I enthused. “No two ways about it. This will get us on TV!”

I imagined the buzz I’d create as the appraisers beheld my rare Beatles advertising poster and asked “Where did you find that?”

To be double sure, I did a little research online when I got home. Let me emphasize “little.” It took all of two minutes to discover — on eBay — that my banner was indeed a poster but not an advertising piece at all. No, it was simply a poster that had sold for 35 cents in 1964, folded up into magazine size, published by DELL, the paperback manufacturer. It is not rare. And it sells on eBay for about $35. Ten times what I paid.

Ouch. So here was my second mistake: I should have taken the time to pull up eBay on my phone and do a quick search before I purchased my poster. That would have taken me five minutes, tops.

Mind you, I don’t think the dealer scammed me. He wasn’t an expert in the Beatles; he was actually a dealer in antique toys. He seemed sincere when he described the piece as a rare, advertising banner. But then again, you never know.

So here’s the lesson:
1) Buy what you know.
2) If you don’t know the field of collectible you’re speculating on, be suspicious of really good deals.
3) Dealers are not experts. Antiques dealers are often nothing more than passionate collectors. They can be swayed tremendously by their own wishful thinking. They will always exaggerate the value of their items.
4) Do your research. If you have a smart phone, look up the item on eBay — that will tell you the market rate for any particular collectible or antique.
5) Let your partner or spouse be the voice of reason.

Am I pissed? Am I bummed? Not really. I deserve the burn and I’m a big believer in paying for my mistakes. So I’ll live with this awhile to teach myself a lesson. And the next time I’m at an antiques show, I gonna stick with Jill.