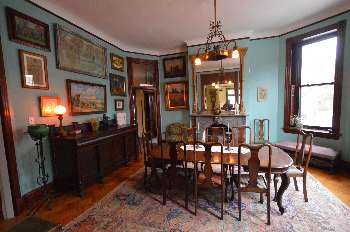 Posted at 00:46h in Uncategorized by rtanner
0 Likes

I’ve never sold a house, so I don’t really know how it’s supposed to go. And I never imagined I’d sell this one. But here it is, for sale: Fabulous Baltimore Victorian for Sale!

It’s the only house I’ve owned. Jill owned a tiny house many years ago in Michigan. The first thing we’ve learned is the most obvious and ironic: when you sell your house, it’s in better shape and lovelier than it has ever been. In our case, there were many small touches we hadn’t gotten around to, like finishing our interior shutters, which we’re now finishing. I’m talking a lot of shutters: about twenty pair.

And then there’s the usual plastering and panting. Our three-story porch had needed painting for a few years. And some of its windows were hard to open. It’s now better painted and more functional than ever. So, yes, the house is looking great. But it took non-stop work. For three weeks, I was averaging about 4 hours of sleep a night. We were racing to get the house on the market because we’d found the ideal farm we wanted buy and the owners needed assurance that we were serious about selling our house.

Getting your house ready to sell isn’t only about making repairs and beautifying. It’s also about getting rid of your clutter. Are you a collector? A saver? A one-day-this-will-come-in-handy-so-I’ll-hold-onto-it person? Too bad because your house is supposed to look ready for a magazine shoot. No clutter. No signs of life: no dirty dishes, no dirty laundry, no unmade beds, no open drawers, nothing on tabletops, etc. We had to rent a storage unit to get rid of some of the clutter. And we gave away a ton of stuff. But, considering how much stuff we own (we are serious collectors, I’m afraid), it wasn’t as bad as it could have been.

The main thing is that we worked so hard getting the house ready to sell, it seemed we’d be done after having completed all of that work. As a result, we found ourselves kind of depressed once the dust settled and we were on the market finally. I mean, nobody had even seen the house yet and we kept looking at one another in wonderment, as if to say, “Aren’t we done?” No, we’re not. We’re just getting started. So this is another thing we’ve learned: selling a house is a long, complicated process. We have now entered the wait-and-see mode where we’re hoping for an interested buyer and, at the same time, we’re keeping the house frozen as a showcase. So we’re on our best behavior and very anxious. Kind of like waiting for a phone call to be asked to the prom.

Even if/when we find an interested buyer, there’s still so much more to go through: the negotiation, the inspection, the appraisal. There’s every chance that the buyer will pull out at the last minute. This happened to good friends of ours: they thought they had their house sale in the bag, but then, at the last minute, the bag broke: the buyer got cold feet.

So we’re trying not to freak out. But, really, we’re freaking out. A friend says I should plant a St. Christopher icon upside down in my yard: St. Christopher happens to be the patron saint of house sales. This is yet another thing we’ve learned.