I want my monkey! 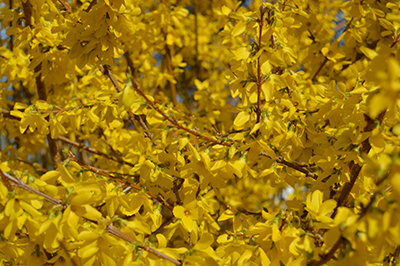 Spring alert: the most invasive weed on our property is “wild grape.” It looks just like conventional grape except it bears no fruit. It grows voraciously–up to three feet a year–and can quickly blanket and smother every neighboring bush and tree. The only way to get rid of it is to dig it up by the root, leaving no tendrils in the earth because they’ll quickly propagate. I’ve spent the past four years rooting out this plant wherever I could find it–usually deep under a heaping thicket of forsythia and briars. The base of a well-established wild grape plant could be six inches in diameter.

Three weeks ago, I was digging out one such interloper (deep in a thicket of weeds where golden finches nest) when Jill approached. She looked shaken, almost shell-shocked. What? What’s happened? Shovel in hand, I was kneeling in the viny bramble behind a wire fence (we fence in this stretch as a haven for birds) and she was standing in the grass, her pale face burnished by the late afternoon sun.

She said her oncologist has decided it’s time for a final try to extend her life: heavy-duty chemo infusion. A last-ditch effort because Jill’s second course of medication has failed and her cancer has reasserted itself. We knew this was coming. Jill has felt increasingly fatigued of late and the edema in left arm has flared up alarmingly.

I sat with her in the grass. Oliver, one of our basset hounds, joined us, delighted that we were at his level. He rolled on his back, writhing pleasurably and groaning his satisfaction.

“I start Thursday,” she said. Two days away.

“It takes four hours, once a week,” she said.

“They say the nausea lasts maybe two days. It’s really bad for some people but for others not so much.”

“How long is the treatment?” I asked.

For the rest of your short life.

A trade-off: a few miserable days for a few decent days. Week after week, month after month, until the chemo peters out–because you can bully cancer for only so long.

Oliver was circling us, pushing his snout between us, turning his head for a nuzzle or a scratch, his mouth open for a friendly jawing of a finger or wrist.

Jill said she loves sitting in the field. “We need to have a picnic, now that the weather’s turning.” 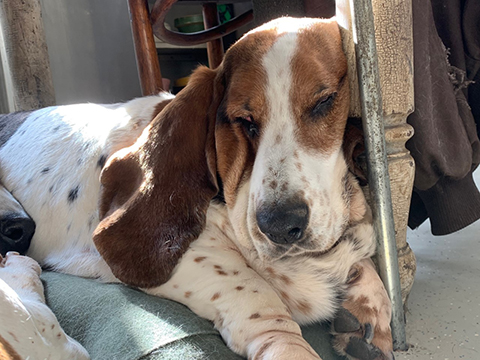 Breast cancer, which can spread to all parts of the body, is estrogen-specific, meaning you can subject it to targeted therapy that suppresses estrogen and starves the cancer. When that treatment fails, you have no other option than to move to general chemo, which kills all fast-growing cells in the body. Hair follicles are fast-growing, for instance. Most cancers can’t be targeted, so the patient has no choice but to opt for the all-killing chemo. With a cancer as advanced as Jill’s, you don’t have time for alternatives. Jill’s original prognosis was three years, with a hope for five. We have just entered year three.

She’s been assigned a palliative nurse, which brings her one step closer to hospice. The nurse has counseled Jill to get her end-of-life paperwork together. We’re working on that–there’s a lot to sort through, a lot to discuss.

How chemo infusion works: they start the patient on a calibrated dose of medication intravenously. The process takes 3-5 hours, preceded by a blood test to make sure the patient’s white blood cell count is high enough to withstand the heavy hit of medication. This “medication” is so toxic, the patient’s clothes must be laundered separately; the patient must flush twice when going to the bathroom; men must sit on the toilet when taking a pee, etc.–nobody, under any circumstances, should be exposed to the patient’s bodily fluids. A couple of days after Jill’s first infusion, I made the mistake of drinking from her water bottle. Within an hour, I started feeling ill before I realized why this was happening. 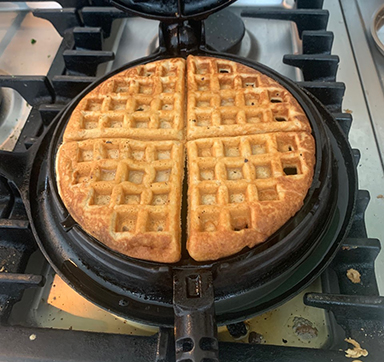 a treat for Jill

Though Jill’s first infusion made her sick, she didn’t vomit, in part because she has two kinds of anti-nausea pills. They finish off the infusion with a heavy dose of Benadryl to keep down the inflammation. It made her incredibly sleepy for two days. As you can imagine, the body doesn’t want to carry this poison and tries in numerous ways to expel it, resulting in rashes, sores, etc. Jill’s primary reaction was debilitating fatigue. “It’s like having a bad flu,” she said.

Her second infusion went better, in part because they reduced the Benadryl and put her on a double-dose of Ritalin to boost her energy. But then her third was the worst. This is how it goes, mixing, matching, reducing, increasing a combination of drugs until they, hopefully, hit the sweet spot, where the cancer stops (or slows, at least) and the patient suffers minimally. It’s all about buying more time. At this point, we don’t know how much poison it’s going to take to affect the cancer.

Last week Jill went to the hospital to have a “port” installed just below her sternum. It’s a stent the nurses use for the infusion: easy access to Jill’s bloodstream because the body’s veins otherwise don’t hold up for long when they’re getting needled as much as Jill is getting needled. We’re spending a lot of time going to appointments every week: so many tests. Jill’s immune system is now at its most vulnerable.

When I went in to get my teeth cleaned recently, our dentist asked about Jill. I said: “You know, when you meet someone special and fall in love, you don’t really know how deep your partner’s love may run–how this love may hold up in tough times or the kind of strength your partner may show when you need their strength the most. Jill’s strength and resilience and good humor have amazed me. I never imagined I’d see her tested to such a degree and stand so strong, meeting her end with such unflinching honesty. I never imagined she would give me so much when it seemed she had so little to give. Almost every day she embraces the good she finds and works valiantly to protect me. She’s making it easy for me and I’m so grateful and so humbled by her generosity.”

The first six months after Jill’s diagnosis, I wept every day. Now, two years in, it seems I’m beyond tears. Without faltering, I can tell anybody that my wife is terminal with cancer. Jill and I talk about her end nearly every day. And Jill jokes about it constantly. For instance, we peruse online auctions recreationally and sometimes bid on bargains: an antique crock, a rusty milk can, a battered toy animal. Recently, Jill saw a toy monkey she wanted to add to her collection of Steiffs (an old maker of toy animals). She said, “Are you going to get that for me for Christmas?” I said, “Maybe.” She said, “I can’t wait that long, I might croak by Christmas! I want my monkey!” She laughed. 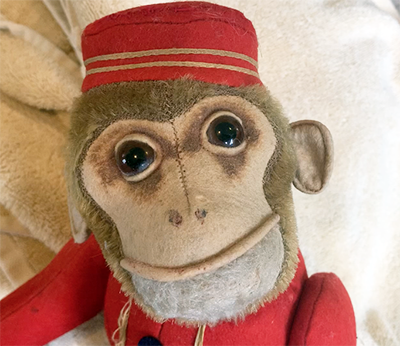 In lieu of weeping, something else is happening to me: I’ve gained 16 pounds in six months. I’m now 30 pounds overweight. Jill says I look “burly.” I find this most distressing. I’m eating my way through grief. There’s no end to my appetite. I’m exercising but not enough. I’ve cut back on sweets and carbs. I’ve never eaten so much fruit, so many vegetables. But the key is portion control. I so envy people who push away from the table and say, “I’m stuffed!” My challenge with food seems akin to an addict’s challenge, every day a new beginning. By contrast, Jill is hardly eating anything. The toxins in her body make everything taste bitter and her sore mouth makes eating spicy foods painful. So I’m preparing very simple, Jill-only meals: oatmeal, pasta with butter, greens without vinegar, etc.

Though Jill spends much of her time resting, she’s by no means “done.” She’s ordered the seeds for our kitchen garden and will manage their nurture, she insists on reviewing every bit of work I’ve scheduled around the farm (because her eye for design is far better than mine), she spends hours every week researching on the internet (for the salvage and supplies we need), she reads a couple of hours a day and streams documentaries and has become an expert at WORDLE, a game I don’t even attempt to play. 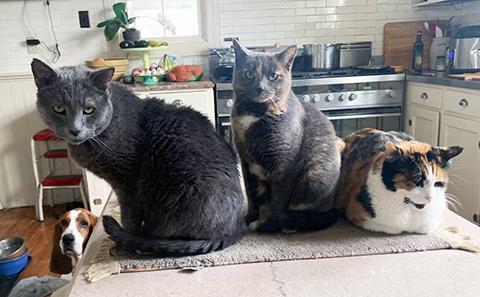 Otis, Paisley, & Cora (with a peek from Oliver)

“West Side Story” has been at the top of our household playlist lately. Jill’s favorite is “Officer Krumpke.” She’s especially fond of humming the play’s “prologue” and snapping her fingers like a Jet. And then I join her as our three cats watch with wonder from the kitchen table. (BTW, Tony Kushner did a fabulous job updating the script for Spielberg’s remake.) More than once I’ve sung “A Place For Us” to Maisie and Oliver, our beloved basset hounds. Though they don’t understand what I’m saying, I think they know I mean every word.

.
Alas, our medical bills are coming at us hard and heavy. We’d be so grateful for any help you can offer: