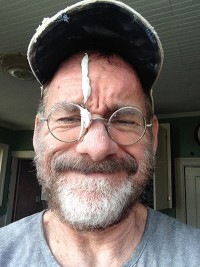 07 Dec One Year on the Farm

It’s deer-mating season. “This time of year, deer do strange things,” my neighbor told me. “A buck that’s been skittish and hard to track all year will suddenly walk right out in front of you like he doesn’t care about anything.” Anything, that is, except a doe. Some mornings, with the mist rising from the frost-silvered fields, we hear the big bang of this neighbor’s rifle in the 100 acres that surround us. I haven’t seen any deer this season, except dead by the road. A deer trail once ran through our farm but, since we fenced the property, the deer don’t use it. Jill and I have been on the farm a little over a year now, but we’ve been in the farm house only since September and I’d be lying if I said it’s not been hard. It’s been very hard. We’re still living out of boxes. Good luck finding that wool winter cap or that dog collar or that hairbrush. These are small annoyances, granted, but they add up when, on a daily basis, our life seems as scattered as the wreckage of a jetliner. This is what weed abatement looks like, before and after

Living in/on a property that needs so much work makes life complicated because we can’t truly move into any room until certain basics are in place. For example, it made no sense to set up my office until I had safe electricity to plug into in that room. But I couldn’t replace the electricity until I replaced the floor and ceiling. One thing leads to the other and so on. Other projects that seem less urgent are actually pressing: I couldn’t put all of our stuff into the attic until I had repaired the massive ceiling and chimney damage to those rooms. I wasn’t about to move those boxes twice: into the damaged attic, then out of the attic for repairs, then back into the attic again after repairs. Working on a project like this farm and its decrepit house is like playing a game of Jenga: how many blocks can you remove from the stack (of things to do) without making the whole thing collapse? In this case, the collapse would be mine and/or Jill’s. The commute to Baltimore is harder on her than on me, since I don’t have to get downtown. It takes Jill about an hour. She is also in school for further certification, so she’s double-booked. I’ve given up pressuring her to work on the house. And there’s a lot of pressure, even without my announcing it. Recently, we had to prepare for a new appraisal to secure a home equity loan. I worked as hard as I could to patch and clean up. But the house the appraiser saw is far from the house we envision. To his credit, the appraiser could see through most of the construction and mess. Still, the appraisal hardly reflects what this house is going to be. The perils of plastering.

What is it going to be and how soon? Here’s the sad truth: this place is a money pit. We have had to replace everything. Everything: water heater, furnace, toilets, electricity, water pressure tank, the well, and so on. While we knew this place needed a lot of work, we didn’t know that the previous owners had let things go this far. At first glance, the farm looked like it was holding together fairly well. But now we know it was held together only with spit, string, and rubber bands.

The worst news is that the barn roof needs replacing. It’s a big barn with a lot of roof. A metal roof. Actually, the barn roof is only about 10 years old but it was installed so incompetently, it leaks in 20 places and so badly it is beyond repair. One of several finished floors.

The good news is that when we’re done with all of these upgrades and repairs, the farm will be really done, good for another 30 years or so. But we may be bankrupt by that time.

Mind you, we knew it would be hard at first–the way it was when we were working on the St. Paul house. I figured this farm couldn’t be worse. But, actually, the farm is more work because there’s so much more of it. Still, I am optimistic. Maybe that’s more than obvious.

This week I will take several of the barn cats in to get neutered. They are an interesting bunch: six various personalities, from the hefty tom–Scrapper–to the sniffly and kindly Rosy, who is underweight and suffers from a chronic sinus infection (she probably won’t last the winter). Some days when we walk into the yard, it’s like wading into a pool of cats: they circle and wend and mew, tails up. Other days, they are nowhere to be found.

I love it here. In the morning, the red tail hawks are calling over the fields. Sometimes a V of geese glide overhead, winging south and honking their goosey hiccups. Then there are the vultures, circling, searching silently, their big bomber shadows rolling over the landscape. And lots of crows, always in a crowd, always congregating to chatter about the latest find. The other day, a murder of them had staked out a wide swath of grass, where apparently they had found good pickings. Worms? While I was sanding the living room floor this weekend, I turned around to discover — there on the floor — a 3-foot-long snake, the likes of which I hadn’t seen before. It had orange diamonds, framed by black, on its silver-gray skin. A milk snake, I learned later. Harmless and beautiful. I threw a towel over it and then deposited it outside. If you live in the country, you should like snakes. Someone I met recently confessed that he lives in dread of snakes and kills them whenever and wherever he finds them. He finds them a lot in his house, he says. It’s a suburban house, a reminder that the land we claim and covet isn’t truly ours, it’s just borrowed.

We’re trying to take it day by day, repair by repair, Jill and I. Last night I installed lights outside our front door to greet guests we have yet to invite to our old house. Tomorrow I’ll install more lights and start sanding the main staircase — signs of progress abound as we approach, with great hope, a new year.