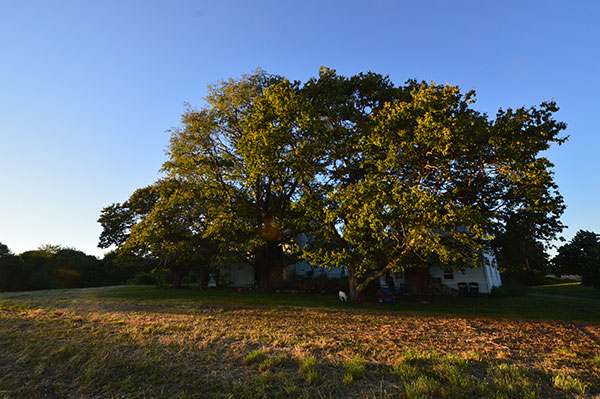 01 Oct Our Third Week on the Farm: Stalled & Wet

I startled Jill from sleep last night when my ice-cold elbow touched her back as I came to bed. Ice cold because I have to soak my elbows in ice water several times a day to keep the inflammation down: chronic tendonitis from too much physical labor. Brush in a 35-yard Dumpster.

When I went to band practice last week, I unzipped my drum case and out spilled 5 mice, each bolting in a different direction. After much dodging and yelping, a bandmate and I rounded up the mice in a plastic grocery bag. I felt like the harbinger of the Plague, having carried the mice from my farm into my friend’s lovely suburban house. There are oh-so-many mice out here on the farm. If they can find a place to make a nest — any dark padded place, any open box, any roll of fabric — they will make nest. storage in our horse stall

Lester, the animal trapper, came by this week to remove ground hogs and one wily fox but so far he hasn’t had any luck with his many cage-traps. Lester is a stout man with a broad smile and large red hands. He enjoys fishing with his granddaughters and has just inherited his mother’s place nearby, a bungalow on 3 acres he hopes his daughter might want, if only she’d move back from Ocean City. “Got no sledding hills for kids out there,” he said. “Not one.”

It seems I’m seeing a lot of men in their 60s out this way.

At the local Home Depot the other day, I saw a grizzled 60-something farmer type wearing the predictable ball cap and driving a huge pickup. He had Jethro Tull blaring from his cab. chainsawing through the brush

I called Bernie, the local fix-it guy, after my tractor burned up its starter. A small wiry 73-year-old with the dour expression of a Sunday school teacher, Bernie lived on our farm for 35 years, took care of Mrs. Raver (owner of the farm) until she died and then was kicked out by Mrs. Raver’s daughter, the woman who sold us the farm. Bernie had been hoping to retire here. But apparently he felt too possessive of this place, too at home — so much so that he just walked right into our apartment without knocking and said, “That starter was about to fall off. Missing a bolt.”

He’s decided the new starter I bought wasn’t the right one or it was defective. So I’m waiting for him to try out the replacement I got. That means I’m without a tractor. You can’t run a farm without a tractor. I’ve got a Dumpster to fill with rotting logs. This is work I could do in spite of the rain.

The rains have stopped us dead. The fence posts are up on our 2,000-foot run around the farm but we have to wait for clear weather before the guys can put up the fence itself.

This week’s monsoon pounded the barn, where our apartment is. The big barn doors shuddered and shook, our dogs paced and gazed with concern at the ceiling. But all held. The windows were black with rural night, the roar of rain like crashing waves: it seemed we were in an ark. We’ve discovered that the barn where we store all of our furniture and belongings leaks. It leaks a lot. We’ve placed buckets and bins on top of furniture and boxes and equipment but already several rugs are soaked. We’ve got to move some of this stuff into the farm house ASAP.

The house —  upstairs — doesn’t leak but the basement is flooded. The stone foundation has failed in some key spots, allowing muddy water to well up. When it dries, it leaves a thick delta of red silt across the concrete floor. Waco, our demolition expert who was taking out the 800-gallon (empty) water tank in the basement, has disappeared. I’m getting nervous because I’ve got to clean out the basement and get a new furnace installed before the freeze comes in late October.

We were going to get our barn cats this weekend but it looks like that’s not going to happen because Lester hasn’t caught the fox yet. He can’t even get a single ground hog because of the rain.

The New York Times sent us a refund because they can’t get anybody to deliver the paper out this way. That’s a hardship. We’re by no means in a remote area. One of my weekly pleasures used to be having the Sunday Times to read all week. We’re still pulling tomatoes, basil, chard, and other great food from the gardens. And every day we refine our plans for planting next year. For starters, we’ll double the size of the kitchen garden and give the barn garden wholly to flowers. Oh, yes, the flowers are still very much with us — everywhere we turn. We had high hopes for our chestnuts but the worms (beetle larvae) got to most of them. We have three rare American Chestnut trees — huge spreading beauties that should have been taken out by the blight that claimed most American chestnuts during the last century. Ours survived not only because they were lucky but also because they were isolated. They stand alone behind our “barrack” barn.

In sum, we don’t feel settled yet, our life is so different here. It’s like we’re visitors who’ve stumbled into an abandoned property and have decided to stay. It will be months before we get into the house. And there’s so much we’re still learning about the property and its many buildings. At the same time, there’s so much work to do here, it’s difficult to focus on anything else. Thanks to the rain, I was able to sleep in late today: 7:30.

It’s hard to say which of us is a bigger mess, Jill or me. I fall into bed at ten or so every night and drop into a deep sleep, only to wake abruptly at 4:00 or 5:00 in the morning, my arms tingling and throbbing, my mind abuzz with plans and worries. As I eat my morning bowl of oatmeal and watch the mist rise over the distant fields and consider the silver fencing line that separates our field from the next one, I think, I’ve got a tiger by the tail.

It’s beautiful like a tiger but oh-so-scary too. Stay healthy, I coach myself. Stay on top of it. Plug the leaks. Pray for fair weather.

Here’s the first video of our farm life: Mowing My Field