04 Mar She Wakes Up Laughing 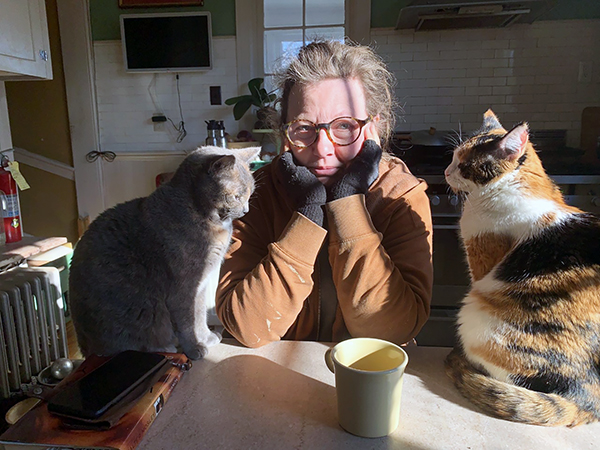 Reading the sad chronicle of the journey I’m taking with Jill can’t be easy, I know. And it’s not getting any easier. Lately, Jill has been taking a medication so toxic, it’s labeled as hazmat: “Caution: Hazardous Drug.”  Several times a day she gargles with a steroid solution to keep down the open sores in her mouth. You see where we’re going? I want you to accompany me on this journey but I don’t want to bring you down with the agonizing details. So, from this point on, I will describe only the necessary elements and spare you the rest. 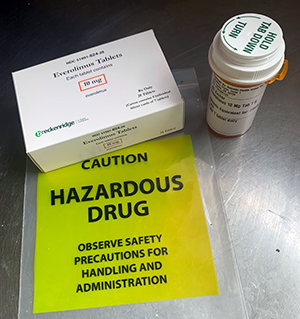 What’s most important here is Jill’s spiritual resilience. By “spiritual” I don’t mean religion. I mean the glowing core of her humanity, her ability to joke and laugh and love throughout her ordeal. From the first day I met her, I knew she was a very special person. But I didn’t imagine then that our life together might take this turn, and so it never occurred to me that Jill would be tested to such a degree. Which is to say I’m in awe of her humanity and the profound generosity she has shown me.

In previous posts I’ve talked a lot about our travails but I really haven’t done justice to the breadth of our relationship and the fun we have together. So here’s a catalogue, by no means complete, of the many small instances that make our time together joyful.

1) Like me, Jill enjoys goofing around: saying silly things repeatedly or sometimes just acting crazy. For instance, if she’s upstairs and I’m down, she might shout my name: “Ronny!” Then I’ll shout hers: “Jilly!” Then: “Ronny!” “Jilly!” “Ronny!” “Jilly!” Just for fun. 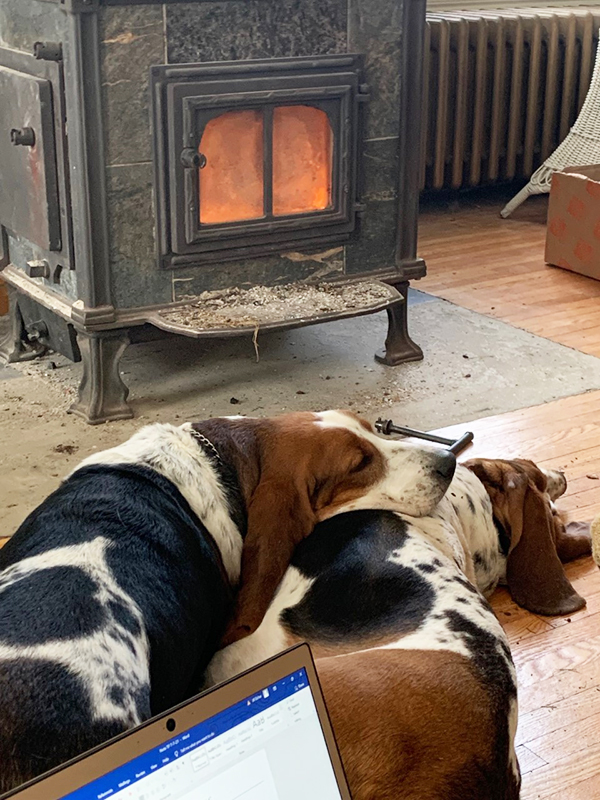 2) Jill often wakes up laughing. She seems to have access to the giddy girl she was as a child.

We’re in bed, the morning sun illuminating our old tortie curled at our blanketed feet, and Jill starts chuckling. She’s facing her side, I’m facing mine. The subtle seismic shakes of her shoulders rouse me and she’s chuckling louder. I turn: “What?”

Now she laughs, pulling herself up from the blankets. “You remember when we stayed at that farmhouse and the dogs [PJ and Freida] were sleeping in the kitchen–but PJ kept whining until you went in there and scolded him?”

“And you didn’t see that there was a drowned mouse in his water bowl?”

She laughs some more.

“Poor PJ had to sit through the night, freaked out by that drowned mouse!”

“And Frieda [our basset hound] couldn’t have cared less–Poor PJ!”

3) Years ago, I knew a janitor at my university, a nice older man who worked slowly and seemed not to have a care in the world. Whenever I asked him how he was doing, he’d smile wryly and say, “Oh, you know, another day.” This became a phrase Jill and I have repeated around the house for years–for no good reason. She’ll walk into the kitchen while I’m cooking: “Oh, you know, another day.” I’ll look at the cats sleeping on the kitchen table and say, “Oh, you know!” On and on.

4) When Jill and I are working in the house, inevitably one of us will start singing. Our repertoire of music is the Boomer playlist: Beatles, Stones, CSNY, etc. Jill might be upstairs, I might be down, and then she’ll start “Eight Days a Week” or “Some Kind of Wonderful” (Grand Funk version). Then I’ll join in. Soon, we’re shouting the lyrics. If we’re in the same room, usually the kitchen, Jill might roll up a potholder and use it as a microphone. Always the song gets out of control, Jill shouts, “I’m gonna be a star!,” and we’ll start laughing.

5) Jill loves to write notes to me–reminders, instructions, warnings–which she usually leaves taped to the refrigerator. If it’s a warning (“Don’t touch my cream puff!”) she’ll accompany it with her avatar: a wild-haired cartoon woman. Her notes are often teasing. A few months ago I bought some dried seaweed, thinking I’d sprinkle it on my salads to boost their nutrition. Jill laughed when I showed her my purchase. “Don’t you dare put that stuff on my food!” she said. I set the pack of dried seaweed in our pantry and there it stayed, untouched, for months. And then Jill stuck a note on it: “Ron, just admit it. You’re never going to eat these horrid sheaves of seaweed! You got in a mood and thought you’d do the right thing diet-wise. But the right thing now is to throw them out. It’s OK. Really.” 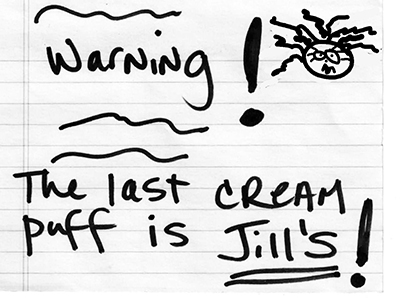 She turns over. Always, her thick, curly hair in the morning is a Medussian mess. She says, “I was watching one of my crime shows last night. During one of the interviews, the guy they’re talking to said, ‘I was pulling out of my driveway and saw something on the ground behind me. So I stopped and got out. It was like a canister wrapped in tape. I thought, Man, that looks like a bomb! I wasn’t gonna pick it up–so I kicked it!”

Throughout the day that’s our refrain: “I kicked it!” 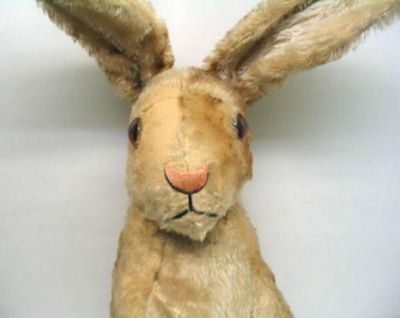 8) As a child, Jill surrounded herself with toy animals. She never played with dolls. She wanted horses, dogs, cats, sheep, and rabbits. In fact, she raised rabbits when she was a teenager.  Our three cats and two basset hounds adore her and bring her delight daily. As soon as she gets up in the morning, she’s sweet-talking them and, inevitably, singing to them. When she sits at the kitchen table with her coffee and laptop, the cats–Cora, Paisley, and Otis–arrange themselves on the table to watch her and drowse in the sunlight that beams through the big window over the sink. Our hounds, Maisie and Oliver, snuggle under the table, always at her feet. This is how I start my day, beholding sun-beamed Jill and her acolytes.

9) Many years ago, while Jill and I waited in a doctor’s office for an appointment I had made, a nurse wheeled in an older man who was obviously blind. The blind man was talking loudly to himself–or, rather, he was talking to the memory of a friend from long ago. Laughing, chuckling, shaking his head in mocking dismay, the blind man said, “Bobby, you was always trouble and now you gonna get yours–I told you, yes I did, Bobby, you sure gonna get yours!” On and on he went, joyfully invoking his friend’s name.

From that day on, it became a goofy catch-word for us–Bobby!–to express surprise, joy, or satisfaction. For years we’ve passed “Bobby!” back and forth, at least once a week.

10) I often leave one or more scraps of paper on the kitchen counter, usually measurements or dimensions of some construction project I’m immersed in. One day, looking for my latest scrap scrawled with measurements, I picked up a piece of paper that showed a confusing array of numbers, which gave me pause as I thought, WTF? Then Jill, watching me from the kitchen table,  laughed and said, “I though you might be interested in some new numbers.” 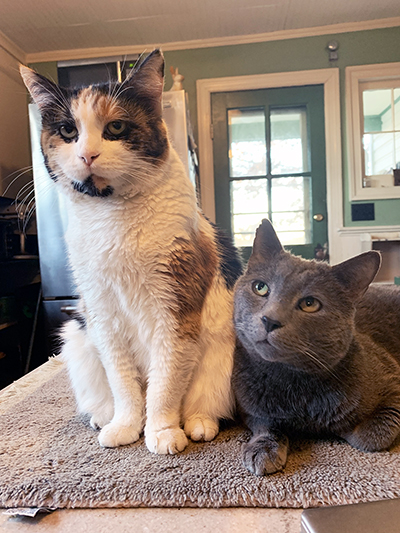 11) Not long ago, there was this huge Chinese acrobatic troupe touring the country, called Shen Yun: their commercials were all over TV. Jill and I enjoyed making fun of the announcer repeatedly saying, “Shen Yun!” So we started saying it to each other at absurd and inappropriate times. I’d serve her dinner and say, “Shen Yun!”  She’d feed the cats and enthuse: “Shen Yun!” I’d stare down at the dogs and say, “Shen Yun!” We still do this.

Jill turns over. “I dreamed that after I lost my hair from chemo, I bought a funny hat.”

She laughs again. “It was, like, four feet tall and made out of cats–like ten cats!”

“Alive of course! All of them stacked neatly on my head.”

“That is kind of funny.”

“Nobody seemed to mind,” she says.

“Cat lovers, at least. I imagine dog-lovers had other opinions.”

“I was walking around with this towering cat hat!”

13)  Often, when a groovy tune plays from the radio or stereo or TV–something from the 1950s or ‘60s, like “Girl From Ipanema” or “Twist and Shout”–Jill will start dancing: the Twist, the Frug, the Swim, the Lawnmower. Something silly and fun. I’ll join her and we’ll gyrate like that until the song is done. Always this makes her laugh.

Multiply these examples times ten and you get an idea of the simple pleasures we share. It doesn’t take much to turn a dark day around. I’m not saying every day is like Pee Wee’s Playhouse–we have moping days too and sometimes Jill can’t do more than lie on the couch with our three cats. But if she’s feeling halfway human, she’ll reach for joy, not grief. Just yesterday she came dancing into the kitchen, singing “Do Hokey Pokey!” until she broke up with laughter. God, I love this woman. 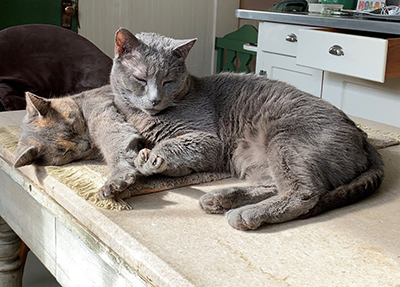 .
If you can contribute to Jill’s medical expenses–every bit helps–here’s the link: