I picked the last of the peaches yesterday. That’s our big summer news: our orchard has matured finally and given us bushels of amazing peaches. The good thing about peaches is they don’t ripen all at once; if they did, you’d have to open a roadside stand because there’s no way you’re going to consume, can, and otherwise use ten bushels of peaches. Fortunately, it might take two weeks to harvest all of the fruit from a single peach tree, starting with the sunniest side of the tree. 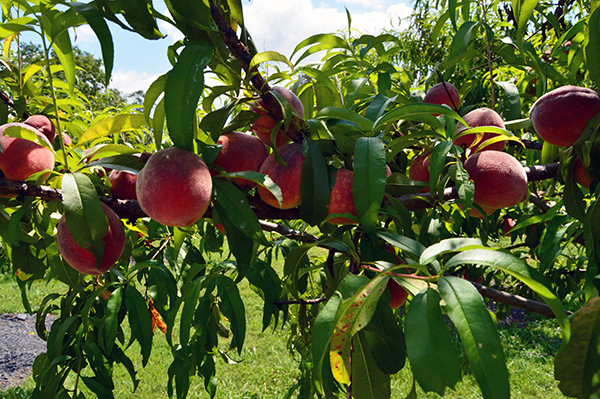 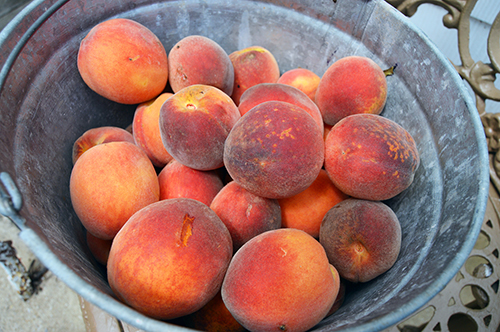 Your primary competitors will be yellow jackets and hornets, who will gnaw penny-sized holes in the ripening fruit (they won’t go after the green ones). Mostly they’ll leave you alone, they’re so intent on getting their eats. There are also tiny beetles, stink bugs, and even lady bugs going after peaches. But none of these is serious trouble. Any peach that’s been nibbled a little I will take, cutting out the bad part and using the rest in jam or whatever. Although we have plenty of squirrels on the property, they don’t venture out to the orchard because they’d be too exposed. We have no problems with birds either. So we’ve been lucky. This may change over time, as the orchard delivers more and more. 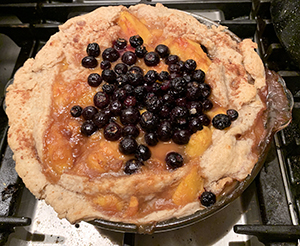 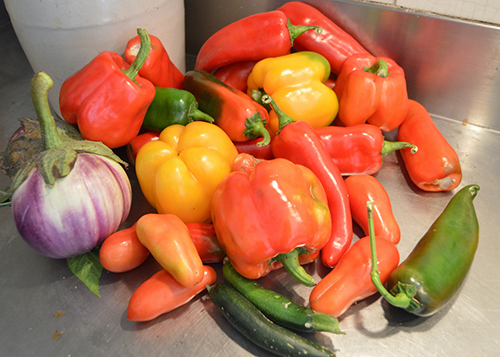 Our kitchen is steamy and redolent from canning tomatoes and peaches (separately). Soon I’ll move on to apples. I’m also drying herbs and tomatoes (i.e., “sun-dried” tomatoes). I love these domestic chores, baking pies and breads and binging on “This Farming Life,” one of my favorite British reality shows (about raising sheep and goats and all that). Spending a day in the kitchen–especially when it’s raining–is a welcome break from working outside. I’m working outside every day, racing to get the farm ready for sheep, goats, chickens, and ducks. “Racing” because Jill doesn’t have much time left. 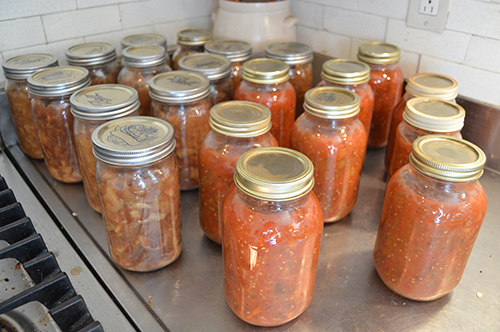 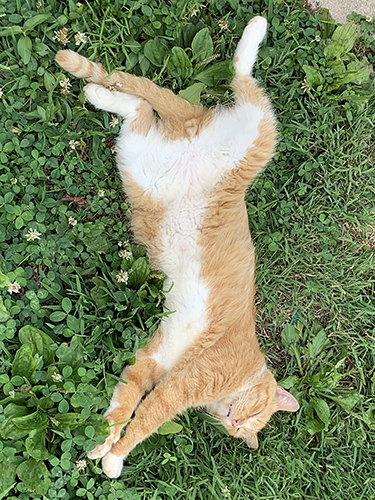 Scrapper taking a nap on a hot day

We don’t know how much time but, alas, for the third straight month, her numbers (cancer antigen count) have risen sharply. This means her meds are no longer working. The oncologist will give it one more month; if there’s no change, they’ll have to move to an alternate, less optimistic medication. If that fails, there’s nothing left except old-school chemo (ingesting poison in the hope of killing the cancer before killing the patient). After her last scan, Jill was startled to learn that she’s fractured her ribs and her pelvis, none of which have healed. Her bones are that fragile. She’s had bouts of breakthrough pain, a scare that cancer had moved to her uterus (seems to be okay), and persistent fatigue for the past month.

Up until that point, she had been remarkably resilient, hoping to last for several years and at least enjoy a good one. But this new turn feels like a reality check and it’s really brought both of us down. A dozen metaphors come to mind. Here’s one: you’re watching a tornado grinding its black funnel on the horizon. Frightened and amazed, you’re momentarily mesmerized, it’s so huge and awful. Then you see it turn–in fact, you suspected it would turn and come this way but some part of you refused to accept the inevitable. And now it’s growing larger, its freight-train roar louder, you can feel the air pressure drop, your ears pinging, the bite of grit hard-flung at your face. The dread, the head-spinning drop into a black abyss, that’s what overtakes you now that you have, what, thirty seconds to find shelter?

Still, we forge ahead. I continue to direct the non-profit. Its centerpiece, the Writer’s Retreat, is going great: we’ll be expanding its programming this year. Though she’s resigned from our non-profit’s board, Jill continues to serve behind the scenes, helping me in a dozen ways with her ideas and research. The farm itself has never been more productive. Eventually, I’ll finish our many building projects (this week I’ve finished a deck for one of our sheds) and then be occupied only (or mostly) with maintenance, which will make life here much more manageable. 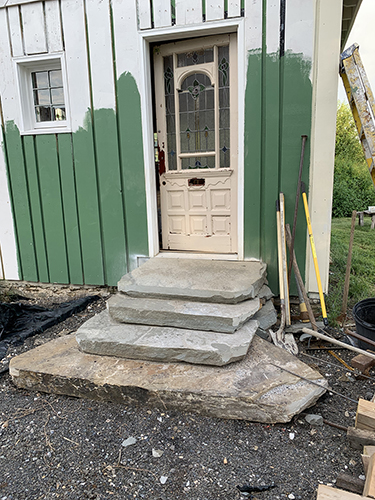 Our plan is to get sheep and goats this spring. This may sound ridiculous or unnecessary. My brother Dave wondered how we could afford animals. Let me be clear: we want only a few sheep and two small goats. Just enough to give Jill the thrill of having farm-friendly furry critters. She’s always been crazy for animals. In short: this is her last request.

I’m not sure I can make it happen that fast. I hired a helper to assist me once a week but he disappeared three weeks ago. I also hired a carpenter to do some much-needed work. He was great while he lasted, but then he disappeared too. I don’t know where they go or why. That’s kind of the way it is with temp help. As you know, the labor shortage is really disrupting business nationwide. 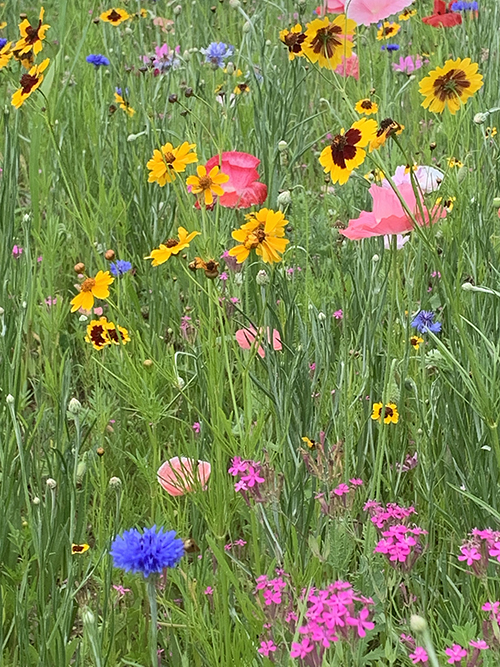 Unlike last year, I’ve been able to keep up with the kitchen garden and even managed to plant one-third of the pollinator garden. I also fenced in the grape arbors to keep Maisie, our sneaky basset hound, from eating all the fruit. I know, grapes will kill a dog–but apparently not a basset hound. She also trots out to the orchard to gorge on fallen peaches. Some nights when I let her out, she disappears for half an hour or more and then I know she’s rooting around in the orchard. This summer she’s really tubbed out. And soon the kousa dogwood will be dropping its sweet pink berries. Maisie loves those too.

I’ve been having a recurring dream that I’m on a mission to deliver a package. I must travel on foot through a city I can’t identify, through alleys, across trash heaps, up steep asphalt hills. The package is about the size of a shoebox, but soft and wrapped in brown paper. I don’t know what it contains and it doesn’t occur to me to open it. All I know is that I have to move fast and get this package to its destination. But, try as I do, I can’t get there. Often I take a wrong turn, get lost, stand on a street corner, confused, peering into the distance for a familiar landmark.

We’re due for more tests, more treatments. If you can help, here’s a link: 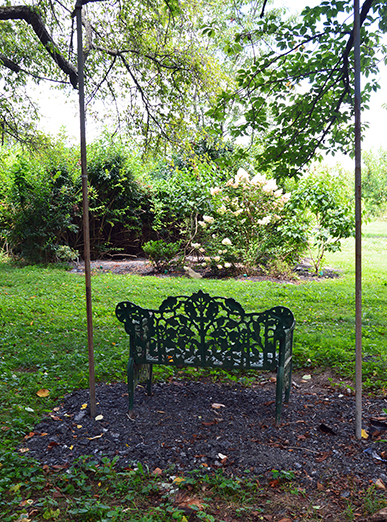