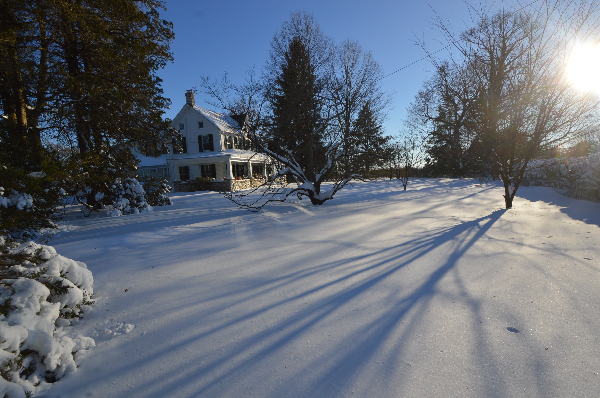 Last night, when I heard the 3-legged fox raise its banshee cry from the back of our property, I woke our big dog, then ran outside, the dog eagerly following. It’s still winter, still mating season for foxes. Hence, the banshee cry. Our fox is a vixen and she’s looking for a mate. She may already be pregnant. One of the lessons of farm life is that, in some significant respects, none of this land is yours or mine– it’s all borrowed and belongs ultimately to Nature, do with it what you will. I want to live and let live but the fox’s interest in our farm, her possessiveness, puts me and Jill on edge.

That the fox would raise her cry right at our fence-line, that she would persist, that she would not run even when the big dog and I stood in the field and barked our warnings: none of this is a good sign. Big dog would not give chase. It seemed that big dog was intimidated. Never mind that big dog, when we lived in the city, made every passerby wary. Truth is, sad to say, big dog is a big softy and would bark and grumble and snuff and growl but would not approach the three-legged fox, yowling in the dark at the end of our farm lane.

So I marched down the lane and big dog followed. “You big softy,” I scolded.

The fox fell silent and then was gone when we arrived at the lane’s end. After a moment’s pause, we heard her farther off, down the hill among the trees. Big dog sniffed her trail but didn’t go far. I called big dog back and said, “Softy!” The fox lost the use of its hind left leg somehow. A trap? A speeding car? So it gimps along, the useless leg raised. But she seems fast enough. I’ve seen her a number of times loping through the neighboring fields. When we get chickens, I am sure I’ll see her every day, watching us from a distance, waiting for her chance. She’ll have a den of kits by that time.

Her vigilant watch reminds me of how, when we were living in the city, there was always some ne’er-do-well scoping out our house from the sidewalk or from the alley, looking for an opportunity. Until we walled in our back yard, we never felt safe.

Winter is about to turn. We’re happy about that and happy, too, that we’ve fared well, or well enough, on the farm during our coldest season. Our main concern was the welfare of our four barn cats. Acclimated to the outdoors, they appear comfortable in all but the most bitter cold. During the day, they often hang out in our little greenhouse, which can get up to about 50 even on the coldest day. But they surprise me on cold nights when, as I walk back to the barn after working on the house, they greet me, then scamper ahead as if I’m supposed to follow.

I myself can work comfortably outside until it drops to freezing: 35 is fine; 32 puts me on edge; 20 makes me hyperventilate. The cold winter sent us indoors, where we’ve been working on the kitchen–a seemingly interminable job because we’re doing everything from scratch: cabinets, counters, etc. I’ve never built a kitchen from scratch.

¬¬Our tractor did a great job of clearing the blizzard’s snow, so we’re confident that we can dig out when we have to. But we’ve learned that the barn apartment gets really cold because it has only radiant-floor heat. A big mistake. My HVAC guy put it this way: “Radiant heat would not have been my first choice for a loft apartment.” We have 20-foot-high ceilings. The dogs are warmer than us because they sleep on the floor. Our bed is on the third floor, where there is no heat.

We’ve been keeping the house at about 50 degrees but it feels much colder. There have been days when I’ve had to resort to warming my hands over the open flame of the stove’s burner. And my feet have gotten so cold, I’ve suffered chilblains. It’s kind of a proto-frostbite: you get sores on your toes and fingers from the cold. It was referred to often in nineteenth-century literature (see Dickens) because people had only fireplaces for heat.

By the way, we have a whole-house generator in case we get knocked off the grid. It’s a big diesel engine in its own shed and I have to run it for about an hour every week to keep it fresh. It generates 100 amps — enough to power everything in the house, including our new, very noisy furnace.