07 Aug We Have No Air Conditioning

We feel this most keenly during July and August, as we stew in the muggy mid-Atlantic swelter. Two months of soaked foreheads, sopping shirt-backs, damp collars, sticky arms, and so on. Every year I say, “Enough of this,” and yet every year I put up with it. Fortunately, most summer nights here in the country are reasonably cool, especially after a quick thunderstorm. We keep our many fans running 24/7, which pleases our three housecats, who stretch out wherever they can find a breeze. Friends recommend window AC units but, after hassling with those clunky, thoroughly inconvenient machines for 20 years when we lived in the city, I say, “No, thanks, let us suffer.” I suppose we’re mostly used to it, except when the 90s persist, as they have of late. 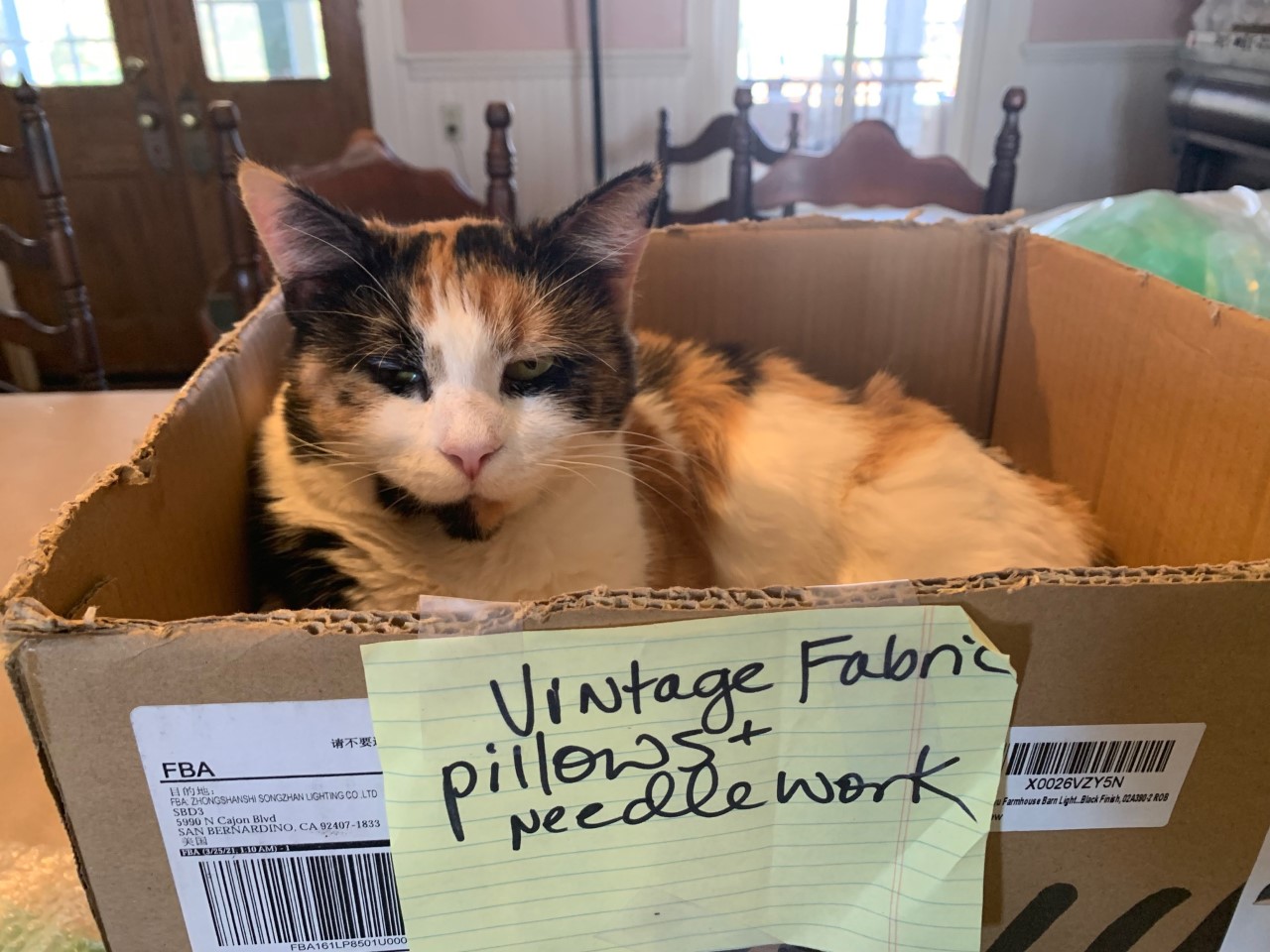 Jill’s medical team sent her a lymphedema machine to reduce severe swelling in her left arm. Every night for an hour, she wraps her arm in a billowy, quilted full-length sleeve that fills with pressurized air to squeeze the fluids up and back into her body, where they can drain. The first time she tried it on, this bulky silver sleeve, she raised her arm, waved it in circles, and exclaimed, “Danger, Will Robinson!” 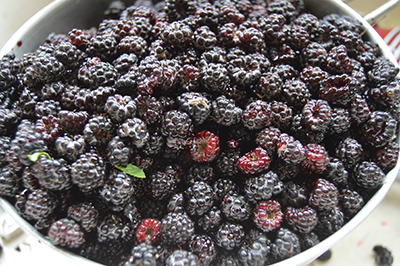 blackberries have been abundant this season

When Jill learned that her cancer antigens were rising again, 200 points in a single week, she and I were worried, of course. We were in the kitchen that morning, Jill chopping cantaloupe rinds for our compost bin, I at the table, reading the morning news on my laptop. As always, Maisie and Oliver were on their bed under the table—and two cats, Cora and Otis, were stretched out just behind my computer screen (catching the breeze from a nearby table fan).

Jill nodded “yes,” then turned her head and called, “Hey, Siri, tell me what to do if my cancer antigens are increasing!”

My phone chimed, there was a pause, then Siri said, “Okay, I found this on the web for what to do if my cancer antigens are increasing. Check it out!”

We burst out laughing. 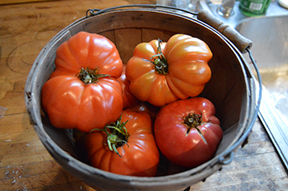 So, yeah, Jill’s keeping her sense of humor, even as her prospects dim. Her latest scans show the cancer hasn’t progressed noticeably. But her left lung has collapsed. Hard to say why. Chemo or Covid or ? This is how it goes. Often it’s not the cancer that takes you out, it’s the “complications,” like pneumonia. Jill has bronchitis. She’s always been prone to respiratory problems because she grew up in a smokers’ household.

Nowadays she’s mostly resting. But, believe it or not, last week she got on her mower and spent two hours cutting grass. She’d rather do that than just about anything. Such exertion knocks her out for about two days, but there’s no stopping her. She laments that she’s “useless” and doesn’t want to hear my assurances to the contrary.

We went to the carnival at the local volunteer fire department. After a two-year hiatus, due to the pandemic, the carnival was at the top of Jill’s wish list. You’ve seen these tawdry little shows, with lame kiddy rides, games of chance run by old carnies, and a few gut-wrenching machines for those with strong stomachs and an incipient death wish. Jill loves the scene: the colorful lights, the festive noise, the giddy crowds.

We tried the giant slide, then miniature roller coaster, which made us scream when it whipped down sharp turns. After that, Jill wanted one more thrill so, without me, she tried something that might have been called the Spider Spinner: passenger cars attached to a pinwheel that rotates at increasing speeds—one of those rides that, at first, you think is a blast but then it keeps churning in dizzying circles until you’re saying to yourself, “Ok, this is the last spin? No. One more. Ok, now we’re stopping? No. Another more . . . “ By the time it stops, you’re woozy and wobbly and saying to yourself. “I did it! I didn’t puke!” Then you vow never to ride such a thing again, as I did many years ago. 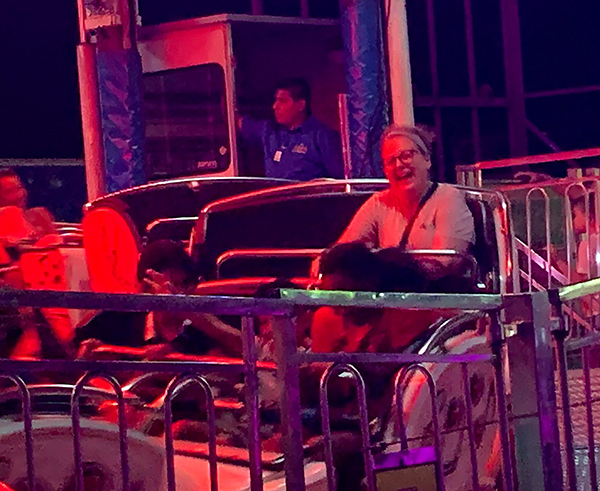 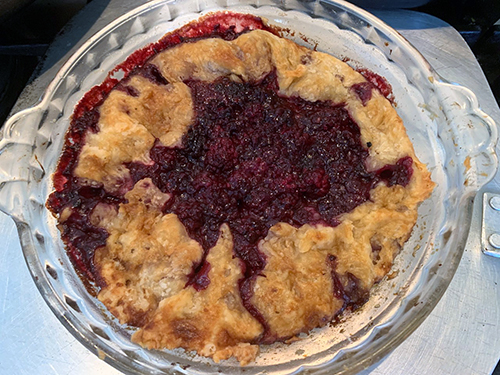 For the first time, deer have been jumping the fence into our kitchen garden and making themselves at home, one of them apparently bedding down in the zucchini patch, ultimately killing the plants. They ate beans, peppers, and okra before any of these could bear fruit. They left the tomatoes alone, thankfully, because nightshade plants repel them. Lettuce went unscathed too. I talked to a local at his farm stand who told me he’d given up growing watermelon because of the deer. Damage caused by Bambi et al. costs Americans two billion dollars a year. Chew on that a while. 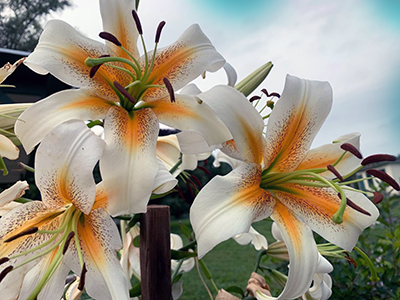 Despite the heat, I’ve been cooking and baking a lot. I’ve pretty much perfected my banana bread, mostly because bananas aren’t lasting long in this weather. My friend Jeni gave me a portion of her sourdough starter, which is not only a big adventure but also a big responsibility because you have to feed your starter at least once a week. It’s a living thing, after all.

Every summer I take an accounting of the wasps, hornets, yellow jackets, and bees. Honeybees and bumble bees have been as numerous as always, bless every little furry one of them. But where did the wasps, hornets, and yellow jackets go? I knocked down only one hornet’s nest early in the season (give them time to rebuild elsewhere) but no others since. I worry. The sixth extinction, you know: our little barbed friends are harbingers of the planet’s health, don’t forget.

Last summer, though I saw plenty of paper nests up high, I didn’t suffer a single sting. I thought this summer would be the same. But then I tried to pull up a stand of bee balm and suddenly yellow jackets were on my hands. Sneaky creeps, they build underground nests and you can never tell where they might be: under a log, in a tree stump, behind a hump of weeds. This time they helped me break my record for single-incident stings: seven. So, yeah, they’re still around.

A couple weeks back, we had a tornado. It didn’t touch down but, with 70 MPH winds, it shook the sh*t out of our county, flattening fields of corn, uprooting trees, ripping off shed roofs. We lost four big trees and some massive limbs. Luckily nothing hit the house.

Lately I’ve found myself watching videos of car crashes and natural disasters, many of which feature incredible escapes and near-misses, like the guy who flipped his car and, just before it tumbled into a crumpled ball, he flew out the open window on the driver’s side and landed on his butt, surely injured by otherwise whole. Apparently he wasn’t wearing his seat belt. Jill, on the other hand, has been watching a lot of “Dr. Pimple Popper” and “My Feet Are Killing Me,” fascinated by bizarre growths and deformities people have lived with for years. Virtually all of these cases, as dire as they may appear, have a happy ending. Sometimes Jill calls me into the TV room to watch with her, as if she needed a witness. I can only conclude that our respective fascinations are similar: we’re looking for examples of escape and survival. That deserves a smiley face, doesn’t it? 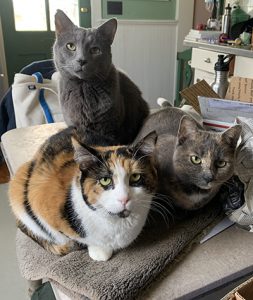